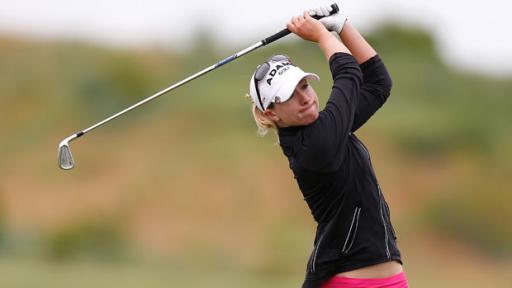 A fourth place in the US Open in New York at the weekend, following a seventh in the previous major - The Kraft Nabisco Championship - has put Yorkshire's Jodi Ewart Shadoff in the vanguard of women's world golf and on the verge of a pick for the European Solheim Cup team to play the US in Colorado (August 13-18).

The £82,879 prize she claimed at Sebonack Golf Club has not only secured her card for the LPGA Tour next year but made her a serious contender for one of the four picks from captain Liselotte Neumann on the 12-strong European team.

"I'm not going to get in as one of the four players based on Solheim Cup points as I've not been playing much on the European Tour," Jodi told the Northern Echo "But I played college golf in New Mexico, which has a similar altitude to Colorado, so hopefully the captain will consider things like that when she makes her picks."

Originally from the small horse-racing town of Middleham, in the East Riding of Yorkshire, Jodi switched from horses to courses as a child when she was bucked off her pony and decided she didn't share her parents' passion for gymkanas and thoroughbreds.

She proved a useful young footballer until her grandfather convinced her that golf was a little more ladylike and set up her membership of Catterick Golf Club and a series of lessons with Andrew Marshall, who is still her coach when she returns to England.

She instantly fell in love with the sport but during typical British weather it was tough to maximise practice time.

“Looking back," she recalls, "I really don’t know how I kept an interest in golf. The weather in England was so bad, and I didn’t have the facilities to practise inside. I think, like everyone says, the rush of hitting great shots and getting better keeps bringing you back to the sport and that’s why I stuck with it.”

She made a name for herself among the amateur ranks in England, winning back-to-back English Amateur Championships in 2008 and 2009 and playing a crucial role on the Great Britain and Ireland Curtis Cup team in 2008.

The next step was to pursue her career on the US college circuit and after sending a video of her swing to the top 20 golf universities in the United States was encouraged to join the University of New Mexico in Albuquerque.

“Everything was just so convenient there,” said Jodi. “A great golf course with facilities and the airport just 10 minutes from campus. And it was small enough that I didn’t feel shocked when moving from  the country to the city.”

During her time in New Mexico, she recorded five wins and gained double NCAA recognition. With the success she saw in college it seemed right to turn professional after graduation and she contended on the Symetra Tour for next two years, recording nine top-10 finishes.

Now an LPGA Tour pro, living in Sarasota, Florida and newly married to Adam Shadoff, Jodi has tallied three top-10 finishes and made a name for herself after leading the first-round of the Kraft Nabisco Championship, where she ultimately ended in a tie for seventh. She proudly says each level of her career has helped shape her into a better golfer.

“I think each stage of my career are stepping stones,” she said. “To go from amateur to college, the different quality of competition pushes you to become better. It was the same when I went from college to the Tour. Being a professional, you have to travel on your own and fend for yourself and it takes a while to learn how to cope.”

She gets back to see family and friends in Yorkshire when she can and is destined to compete in the Ricoh British Women's Open at St Andrews from August 1-4. She might even fit in a chance to see her beloved Leeds United at the start of the new Championship season.