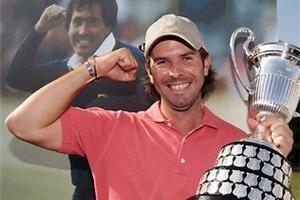 Having spent much of the year planning his recent wedding in the Bahamas, Thomas Aiken has vowed to fall in love with the game once again.

The 28-year-old South African, who broke his European Tour duck last season with an emotional victory at the Open de Espana during the week of Seve Ballesteros’ passing, has accumulated just five top-10 finishes in the space of 12 months.

Spurred on by his nation’s continued success, the seven-time Sunshine Tour champion admits he’s ready to get back on the fairway and rekindle his competitve edge starting this summer.

In an exclusive interview with Golfmagic, Aiken - who was testing a set of Dunlop NZ9 prototype irons - revealed his desire to win the Open Championship, his bid to make next year’s International Presidents Cup team and his admiration for Seve Ballesteros and Gary Player.

Thomas, you’re currently sitting just outside the top-100 in the Race to Dubai standings, how is the game right now heading into the second half of the season?

The game is actually pretty good. Although I’ve picked up just one top-10 so far this year, I haven’t really been playing much as I recently got married in the Bahamas. I’ve spent a lot of time organising it with my wife. It’s something you do once in your life so I thought we might as well do it properly!

I made the cut in Germany last week but I’m really looking forward to getting that competitive edge back. I’ve got a nice schedule coming up until the end of the year and it all starts again at the Open de France in two weeks, before the Scottish Open and Open Championship.

I’ve been working really hard on the range and am hitting the ball well. I’ve been out of action for a while so it’s just a case of fine-tuning the game rather than working on one particular aspect.

In terms of goals this season, I don’t just want to make the top-60 in the Race to Dubai to qualify for the season-ending Dubai World Championship, I want to win again. That is the main goal this season. At the end of one’s career, you’re judged on how many you’ve won not how well you played.

I know I’m capable of doing that. If I don’t win, then it’s important to take the positives and move on to the next week. It’s a funny old game; one you never know what to expect sometimes.

Talking of the BMW International Open last week, what did you make of Jose Manuel Lara’s caddie trying to hide a 15th club in the bushes?

I heard about it but not from the horse’s mouth. Usually news spreads pretty fast on Tour. It was a pretty peculiar incident.

There’s not too much more I can say about it as I don’t know the exact facts but people do strange things for strange reasons. He’s got to look at himself in the mirror, I guess.

This game is a game of honesty and a game that teaches you every life skill you need. If you live by those morals, I think you will lead a pretty decent life. If you’re not prepared to live by them, then that’s your problem.