The Voice of Golf Peter Alliss speaks exclusively to Golfmagic 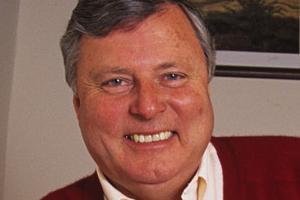 Peter Alliss is spreading his own unique style of analysis to the BBC coverage at The Open, and Golfmagic caught up with the broadcasting legend after he'd received the Golf Foundation Spirit of Golf award to talk exclusively about his life and topics close to his heart.

With the Olympics coming up shortly, it struck me you could add your own unique commentary to certain events. If you could do one which would you choose?

I think it would have to be the marathon because I can then waffle for at least three hours.

Have you ever commentated on anything other than golf?

No I haven't but there is a rumour that I might be invited to commentate at a football match or snooker - just observing as an enthusiast. That's me, I observe things.

Have you played other sports to any level?

No, not really. When I was 15 or 16 the Second World War was on so there were no games organised and as I lived on the south coast it was quite a dangerous place with the bombing and everything.

We're at Lytham this week. What are your first recollections of the course?

I first played here in 1952 and I've been at every Open since, either as a player or a broadcaster.
It's one of my favourite courses, and I am an honorary member here. It's a compact course and a fun links to play.

How do you sum up the conditions this week?

You have to make your score on the front nine, especially with the prevailing wind blowing behind. Then you have to play through a very difficult series of holes on the back nine.

What qualities are needed to win here?

What do you remember of your first broadcast?

It was 1961, The Open at Royal Birkdale which Arnold Palmer won, and they asked me if I'd like to do some commentary with Henry Longhurst. They obviously thought I'd done a reasonable job because they asked me back. I also finished eighth that year - which was my best finish in an Open and I achieved it on three other occasions.

What puts golf above other sports?

It's a very honourable game. And I hope I don't sound too old fashioned but there are too many sports that reflect life and people cheat, including football and rugby. But in golf if you cheat that's the worst thing you can do. I'm not saying people don't cheat, but certainly if you're caught - that's it.

Golf has a very special place in my world. Okay, it can have certain rules and regulations that can be a bit boring and fuddy duddy but that's the way it is.

You come from a famous golfing family. Tell us how you started.

I came back from the Boys Championship aged 14 and a half in 1946 and my father [Percy] who was a very good golf professional at Ferndown, said there's not much point in me going into further education. He said, ‘You're not going to be a doctor, lawyer or an accountant, so you can become my assistant.’ So I carried on from there.

I've also been a club professional at Parkstone and Moor Allerton and been a Tour professional. It has been a wonderful journey and I've enjoyed every minute of it.

If you could pick one, what would be your favourite moment?

There have been so many - the playing, the commentary, the travelling. I counted up the other day that I've been around the world 14 times and never put my hand in my pocket once! [Chuckles]

Seriously though, the Ryder Cup matches I had were very gratifying, playing Arnold Palmer when he was at his best, commentating on Jack Nicklause and Tom Watson [the Duel in the Sun] at Turnberry in 1977, Tony Jacklin winning at Lytham in 1969 and the rise of Tiger Woods.

And I hope this week we're going to see a few more.

So who can win this week?

There are 20 or 30 who could win. It's a very open Open championship. But I do hope a European can win.