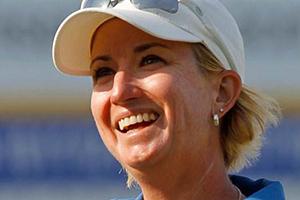 At aged 38, Australian Karrie Webb is still at the top of her game as she proved when winning the ISPS Handa Ladies Masters at The Buckinghamshire on Sunday.

Preferring to test her game alongside the cream of the European Tour rather than spend lonely hours honing it ahead of the year's next major - the Ricoh British Women's Open at St Andrews this week - she was much in demand on pro-am day by media and fans alike.

However, Golfmagic was granted a quick, exclusive five minutes to find out more about how her preparations were going and what makes the World No.7 tick...

Karrie, thanks for sparing your valuable time to talk to Golfmagic. You must be looking forward to the Ricoh British Women's Open at St Andrews?

Well it's St Andrews, it's the Old course, it's the Home of Golf and I feel pretty lucky that I'm still playing and we're playing another British Open here.

Having last played there in 2007 [when Lorena Ochoa won], I thought I might not be back there before I retire. So last time I did the whole thing, stayed at the Old Course hotel and soaked up the atmosphere.

Could you talk about the challenges the Home of Golf poses?

All links golf has its quirkiness and St Andrews has its quirks, too. But it's probably more about picking a line off the tee and trusting yourself that you can hit it there, even though you know the green is over there away from that line.

Did I? You know more than me [laughs]. All I know is that I really enjoyed it. I was so excited to play there and I wanted to play really well that maybe I put too much pressure on myself.

What holes stand out in your memory?

None really stick out but I remember them all.

Had you played there before?

I remember they played the Solheim Cup at Loch Lomond in 2000 and I came over and played St Andrews that week. Everyone knows the Old Course from the time they start playing golf and I'm just like the rest; I wanted to play it.

Tell us about your earliest childhood golf memories

I used to go with my grandparents when I was aged four and play on a Sunday morning, with plastic clubs and plastic golf balls. Obviously aged four, I couldn't walk nine holes so grandad put me on the back of his trolley and pulled me along.

Outside of golf what are you best at?

I love deep sea fishing. I wouldn't say I'm great at it. I'd probably catch nothing more than I'd catch something.

You've won seven major titles including the grand slam of majors and dozens of events around the world. But what do you regard as your biggest achievement?

That's a hard one but if you sum up my whole career, to be inducted into the World Golf Hall of Fame [in 2005] was really special.

And what is your biggest disappointment?

Unfortunately when you play golf you have plenty of disappointments but I can't say there's anything specific that stands out.

What would you say was your worst character trait.

What's your most treasured posession?

My coach gave me a stirling silver marker with my initials on it. In fact I've got two and I've had them for 14 or 15 years. My caddie knows if he loses them he gets fired.

Whom do you admire most in golf?

I grew up looking up to Greg Norman. He was my idol and I've always admired him, the way he handles himself - in defeat as well as when he's won. He has a junior golf foundation in Queensland and I was the inaugural girls winner and the prize was we got to stay in his house in Florida.

And finally Karrie, some quick-fire questions to finish. What was the last feature film you watched?

The Heat with Sandra Bullock and Melissa McCarthy

I read a lot - currently it's Dan Brown's The Inferno.

I saw Pink in Boston.

The last TV show you watched?

I'll watch anything,  especially sports but I miss the cricket when I'm in the US they don't have it on TV so I have to listen on BBC radio.

I'm a massive cricket fan. And yes I've been disappointed by our performances in The Ashes series so far.  But I wasn't holding high hopes. Then with the first Test being so close I was disappointed we didn't do better in the second.

I love test cricket and not just on TV. I went to the Edgbaston Test in 2005. I haven't met a lot of the new guys but when John Buchanan was the coach I went over to Jamaica to see them play two one-day matches.

Thank you for your time Karrie and good luck at St Andrews this week.