Koepka reveals final-round frustration at playing with Holmes, who posted the WORST final round at The Open since 1966. 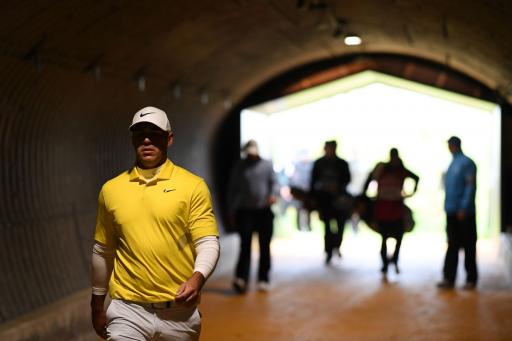 JB Holmes was blasted by golf fans on social media for his snail pace slow play on Sunday at The Open, and his final-round playing partner Brooks Koepka was another quick to point the finger.

Koepka was in contention for a fifth major title in his last 10 major starts going into the weekend, but failed to build any momentum on Saturday before going on to finish in a respectable tie for fourth.

Teeing up in the penultimate group alongside Holmes, the World No.1 was infuriated by his playing partner's pace of play. After leaving the 12th green, Koepka looked at the walking official in his group and pointed at a non-existent wrist watch.

“It was slow, but it wasn't that bad for his usual pace. I thought it was relatively quick for what he usually does,” said Koepka, who finished the week nine strokes behind eventual Open champion Shane Lowry.

Holmes' pace of play didn't exactly help his own game as he closed with a disastrous 16-over 87 featuring four double bogeys and a triple bogey at the 11th.

It marked the highest final-round score by any golfer in The Open since 1966.

“That's what I don't understand when it's your turn to hit, your glove is not on, then you start thinking about it, that's where the problem lies,” said Koepka.

“It's not that he takes that long. He doesn't do anything until his turn. That's the frustrating part. But he's not the only one that does it out here.”

Holmes, 37, was in the firing line again earlier this season when winning the Genesis Open in February, with broadcasters and golf fans questioning his horrendous pace of play.

"You'd purposely bogey the final hole if you knew you were going to be paired with Holmes the next day," tweeted one user.