WATCH: Justin Rose hits the "worst ever shank" at The Open

Henrik Stenson wasn't the only player to hit a dreaded SHANK in the final round of The Open. His good mate Justin Rose had one too! 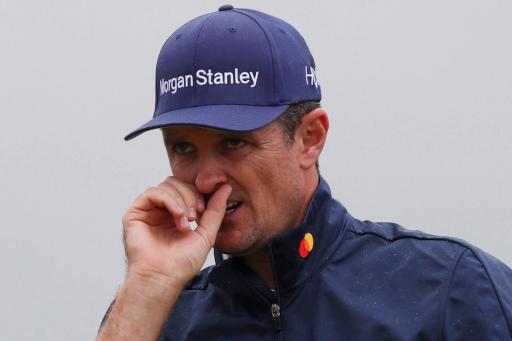 If you're currently a little downbeat about your own golf game, take solace from the fact Europe's great Ryder Cup duo Henrik Stenson AND Justin Rose both hit a SHANK during the final round of The Open at Royal Portrush.

Rose might not have snapped his golf club like Stenson did on Sunday, but he did hit one of the "worst ever" shanks witnessed on Tour in the eyes of golf fans on social media.

Playing in torrential rain, the Englishman was hitting his third shot into the par-4 ninth and was then caught sending a hosel rocket virtually sideways over the heads of those in the gallery.

If you've ever caught the dreaded shanks, take comfort in the fact that it can also happen to the best players in the world.
Exhibit A: World Number 4, Justin Rose #TheOpen #SHANK pic.twitter.com/Na4VEqnxRz

The shot ended up costing Rose a double-bogey six as he went out in 41 shots.

Rose finished the week at 1-under par in a tie for 20th, the same position as Stenson.

WATCH: STENSON HITS SHANK, THEN SNAPS CLUB IN HALF!

The former World No.1 Rose then took to Twitter after his round to see the funny side of things.

"Well 79 is better than 80!! Portrush hosted an incredible Open and I can't wait for the next one," tweeted Rose.

"Congratulations to a fitting winner Shane Lowry, you played awesome golf from start to finish, you made your country proud.

"SHANKS for all the support #TeamRose."

Well 79 is better than 80!! Portrush hosted an incredible @theopen and I can’t wait to return for the next one. Congratulations to a fitting winner @shanelowrygolf you played awesome golf from start to finish, you made your country proud. SHANKS for all the support #Team pic.twitter.com/zrQgrHOp1k

THE OPEN: 2 CRAZY STATS THAT PROVE LOWRY WAS DESTINED TO WIN!

One golf fan took to social media to say: "Wow, Justin Rose with the biggest shank I've ever seen on the 9th."

Another wrote: "Watching Justin Rose shank that pitch has me thinking I could be on Tour. I do that s*** all the time."

A fellow Twitter user said: "OK, I have to admit Justin Rose's shank makes me feel less bad about my play this weekend!"