Take a look at the Royal Portrush weather forecast for rounds one and two of the 2019 Open Championship. 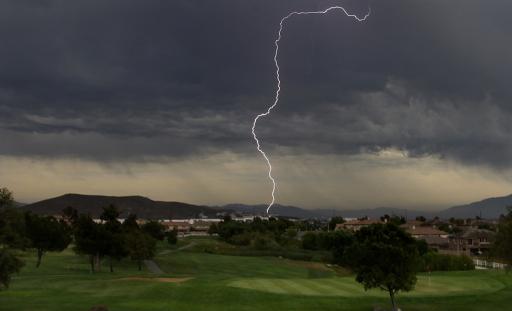 The final major of the year, the Open Championship, starts this Thursday at Royal Portrush in Northern Ireland. Links golf plays its toughest when the weather is rough, with a strong coastal breeze and the typical rain you expect to see when playing in countries like Scotland and Ireland. The weather will play an important role this week and it looks like the players will have their work cut out...

Northern Ireland is renowned for having some of the most beautiful links courses around, but the magnificent views can quickly become a golfers nightmare in a matter of minutes.

On a calm and sunny day, links golf will provide you with stunning coastal views that you'll remember for a lifetime, but links courses are known to be tough for a reason and that's the weather.

Last week at the Scottish Open, many players thought they'd be in for a taste of what's to come at Royal Portrush and be able to practice their links golf in wet and windy conditions, but that wasn't the case.

Instead, the sun was shining, the breeze was calm and the winning score was 22 under par. It might have made the tournament thoroughly enjoyable for the professionals in the field, but a few of them would have been hoping for some rain to preprare them for this week.

According to the BBC weather forecast, we can expect to see plenty of rain at the Open Championship, especially in the afternoon of the first two rounds. Players teeing it up in the morning on Thursday and Friday could have a huge advantage over those playing later on.

If the morning players can get out there in round one and put a decent score together before the rain comes, they will be licking their lips watching the rest of the field go out in the afternoon.

There are some top players who will be heading out in the morning of the second round on Friday, including Brooks Koepka, Justin Thomas, Tommy Fleetwood and Jordan Spieth.

There is even a chance of thunder storms in the early evening on Friday, meaning players going out late afternoon could be in for a rough ride. Rory McIlroy, Francesco Molinari, Bryson DeChambeau, Rickie Fowler, Adam Scott and Hideki Matsuyama all tee off from 3pm onwards on Friday, so could expect some serious rain towards the end of their second round...

Previous
Which type of golfer are you? We have your answer right here...
Next
Brooks Koepka: "I don't practice before regular golf tournaments"