The Open was the only major that was cancelled last year, but it will take place later this year with or without the fans. 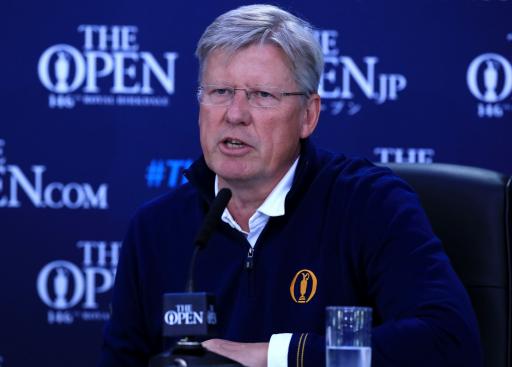 R&A chief executive Martin Slumbers has confirmed that the 149th Open Championship will go ahead at Royal St George's in July, with or without spectators, after the event was cancelled last year due to the coronavirus pandemic.

The Open was the only major in 2020 to not go ahead, with the Masters, US Open and PGA Championship all taking place at a later date than originally scheduled.

Slumbers will monitor this year's Masters at Augusta, which will have a "limited number" of patrons and he remains optimistic that spectators will be a part of the Open in Kent later this year.

"We will play The Open this year," Slumbers told Sky Sports News. "We are certainly planning to stage The Open, but clearly at this point there are multiple scenarios.

"We are working with the government and health authorities, and it's certainly a lot more complex than staging a normal Open Championship. But we are going to do everything we possibly can to put on a great Championship for the country.

"I think there's a very good possibility we will be able to have spectators, but we will have to wait and see how many. We are balancing the health and safety of everyone involved, but I strongly believe The Open needs spectators.

"It will be really important to have some, but we want to make sure we do it smartly, intelligently and with due diligence."

Slumbers revealed he will be taking his colleages from the R&A to Augusta in April in a bid to learn more on how a major championship can safely and successfully go ahead with a limited capacity.

Augusta National recently announced patrons will be attending the Masters in a limited capacity, and Slumbers is keen to assess the outcome

"It's quite interesting. After this dreadful year that we have all gone through, collaboration and learning are two concepts that we're all picking up a lot more," he added.

"So, yes, I'm talking to my colleagues at Augusta, I'm watching, I'm learning and we are all doing that as we grapple what's going to be the 'new normal'."

NEXT PAGE: Paul Casey reveals why he changed his stance on Saudi International appearance