Rory McIlroy gets off to HORROR START at The Open

Tournament and home favourite McIlroy makes a QUADRUPLE BOGEY on the first hole at Royal Portrush. 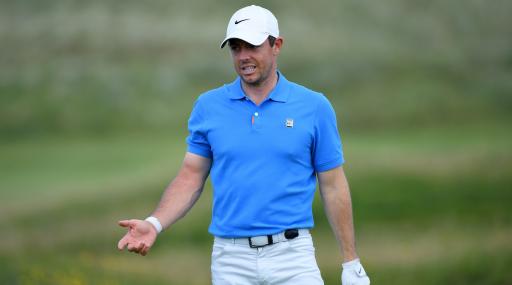 Rory McIlroy made a disastrous quadruple-bogey eight at the opening hole in front of his home fans at The Open at Royal Portrush.

"On the tee from Northern Ireland, Rory McIlroy!"

Huge roars on the first tee from the home fans, but it's a nervy start from the favourite!

Watch all four days of #TheOpen live on Sky Sports The Open or follow it here: https://t.co/PiRMXkYPcE pic.twitter.com/EhupmogLYJ

After going out of bounds off the tee, the favourite makes +4 on the opening hole

Watch all four days of #TheOpen live on Sky Sports The Open or follow it here: https://t.co/PiRMXkYPcE pic.twitter.com/z8eeu0BxRB

McIlroy struck his first shot out of bounds - just as he did in his practice round on Wednesday - and then hit his provisional shot into the deep rough.

From there, McIlroy was back in the deep rough and after eventually finding the green, went on to miss a six-foot putt for triple to card a quadruple-bogey eight.

As it stands after McIlroy's opening hole, he is already seven strokes off the pace leaving himself plenty to ponder for the rest of his round.