LIV Golf Investments and the Asian Tour unveil The International Series with increased investment of $300 million. 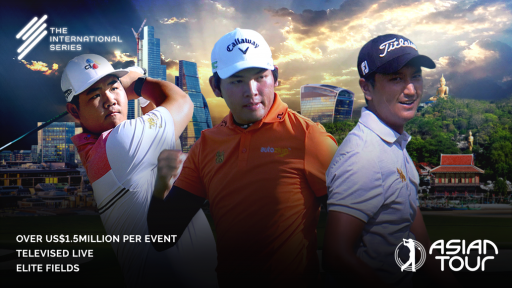 The Asian Tour and LIV Golf Investments today unveiled The International Series and the 2022-2023 destinations and prize purses for its ground-breaking series of 10 marquee international events, one of which will be in England at Centurion Club.

Asian Tour's new International Series will kick off in Thailand in March followed by visits to England, Korea, Vietnam, the Middle East, China, Singapore, and Hong Kong and will feature prize purses ranging from $1.5 to $2million per event.

Today’s announcement also saw the unveiling of the new brand, name, and logo as well as an increase in the lucrative and unprecedented investment into the Asian Tour from $200million to $300million further solidifying LIV Golf Investments dedication to the global game.

As one of the biggest investments in the history of professional golf, The International Series will support playing opportunities and prize funds for the 10 events to be played every season over the next decade.

It has reportedly been designed to drive greater engagement amongst fans, attract new commercial interest and to help stabilize professional golf following a sustained period of worldwide disruption and uncertainty.

"We are on the threshold of a new era for Asian golf," said Cho Minn Thant, Commissioner and CEO, Asian Tour.

"The International Series is a new upper-tier of elite events, the likes of which the region has not seen before, that will mark the start of a phenomenal period of growth for the Asian Tour. It also signifies the beginning of our relationship with our new strategic partner LIV Golf Investments and its CEO Greg Norman.

"Importantly, The International Series will add to the Asian Tour’s backbone of established events to comprise a 25-event season, expected to represent a record-breaking combined prize-fund. Each of the 10 events will be broadcast live across the globe, with plans to attract an international field of headline talent."

In October last year, Greg Norman, was announced as CEO of LIV Golf Investments – a newly formed company whose purpose is to holistically improve the health of professional golf on a truly global scale to help unlock the sports’ untapped worldwide potential.

PIF, one of the world’s largest sovereign wealth funds with a diverse international investment portfolio, is the majority shareholder in LIV Golf Investments.

"We are setting the Asian Tour up as a powerful new force on the world golf stage," said Greg Norman.

"In my 40 years as a professional golfer, I’ve seen many parts of the world that have benefitted tremendously from golf and its growth and development.

"We now have the opportunity to do that in the Asia Pacific region and the Middle East with this incredible investment platform. Everyone benefits – professional players, amateurs, grassroots golf, fans, economies, communities, stakeholders. I’ve never been so optimistic about the future of the sport."

The widely acclaimed Black Mountain Golf Club in Hua Hin, Thailand, will host The International Series Thailand March 3-6, boasting a prize purse of $1.5million, before London stages the next event at Centurion Club from June 9-12, offering a $2million purse.

The second half of the year will see stops in Korea, Vietnam, and Indonesia before heading to the Middle East and then culminating in China, Singapore, and Hong Kong.

The announcement comes on the eve of the Asian Tour’s new season with the $5million PIF Saudi International powered by SoftBank Investment Advisers starting on Thursday at Royal Greens Golf & Country Club.

Speaking at today’s press conference, he said: "I have been fortunate to enjoy an amazing start to my professional career but for this to happen at the same time as the Asian Tour is going through such incredibly positive changes is a huge bonus for me, as well as for all the Asian Tour players."

More details of The International Series events, and other Asian Tour tournaments this year, will be made available in due course.