Bryson DeChambeau apologised to Hideki Matsuyama for making loud grunting noises whilst preparing for the Sentry Tournament of Champions. 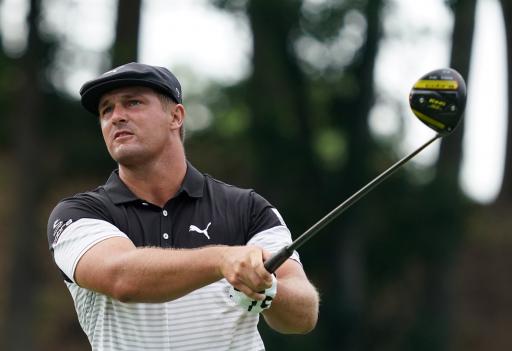 According to reports, Bryson DeChambeau reached an incredible 211mph ball speed on the driving range whilst preparing for this week's Sentry Tournament of Champions, but then apologised to Hideki Matsuyama for the "grunting and self-pump-up utterances" coming from his practice area.

DeChambeau goes into this week's event in Hawaii as one of the favourites to win, but faces tough competition from the likes of World No.1 Dustin Johnson and defending champion Justin Thomas.

The US Open champion already made the headlines earlier this week after his strange antics on the practice greens where after making contact with the ball, a member of his team would follow with an umbrella until it reached the hole.

RELATED: Social media reacts to Bryson DeChambeau putting in front of an umbrella!

It seems more of DeChambeau's pre-tournament practice will now make its way around social media, after the 27-year-old told Golf Channel that he reached a ball speed of 211mph.

We have seen videos of DeChambeau's speed training in recent months and in order for him to get pumped for each shot, there are a lot of noises coming out of himself and his team, which seems to have been repeated even while on the driving range, causing DeChambeauto then apologise to Matsuyama following his session.

Heard 211 earlier today and that after the session he stopped to apologize to Hideki and his camp for the grunting and self-pump-up utterances coming from the end of the range.

Will DeChambeau's quest for more and more speed ever stop? Well he was asked that very question and here is his answer.

So it seems DeChambeau wants to get to a point where he is averaging between 207-210mph of ball speed on the PGA Tour, which would be an extraordinary accomplishment, considering World Long Drive champion Kyle Berkshire currently averages that ball speed.

DeChambeau has been spending a lot of time with Berkshire as he prepares to return to the PGA Tour, so make sure you tune in to the action this week, where it looks like DeChambeau will once again aim to overpower everyone in the field.

NEXT PAGE: How to Watch the Tournament of Champions: Dustin Johnson out with Justin Thomas