Bryson DeChambeau on how geometry of GOLF BALL DIMPLES transformed his putting!

Bryson DeChambeau discusses how studying dimples on the golf ball has helped him hole more putts from close range on the PGA Tour. 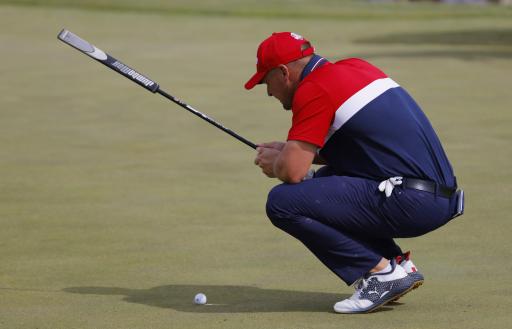 Bryson DeChambeau has revealed how studying the geometry of golf ball dimples has transformed his putting on the PGA Tour.

DeChambeau has just about tried every possible putting method down the years and even resorted to side-saddle putting at one stage in 2017.

Many golf critics considered a slim-lined DeChambeau to be a fairly average putter when he first burst out the gates on the PGA Tour in 2016, long before he turned into Popeye.

While the now eight-time PGA Tour winner will likely forever be best known for his long driving prowess, there can be no denying that the American has also turned into a very solid putter with his ever-popular arm-lock method.

Especially on short putts, with his percentage of holed putts improving every year for the past three seasons on the PGA Tour.

A statistic that stands at 97% on putts inside of five feet.

"When I was putting bad in 2017, I was doing face-on putting, I was trying a bunch of different s**t, and it didn’t really work that well. Nothing was working well," said DeChambeau on the Full Send Podcast.

"I eventually found arm-lock that worked pretty well, but I still noticed I was having these weird putts from like 5 feet and in — they were just coming off line just really weird."

That's where studying the geometry of dimple design comes into play, apparently.

"So I did some study and some research on the golf ball and the geometry of those dimples," he added.

"And so, and this is getting a bit technical, so the dimples, they have edges on them, right. And if you hit the dimple on the edge at the wrong angle, it can come off horizontally or vertically.

"So if you hit it at this angle, it will twist and go off line, but if you’re hitting on the top or bottom of the dimple, it will only affect the vertical launch.

"So when I was putting, I was missing putts from super-close ranges because I was hitting it off the other edges of the dimples.

"And so a lot of guys who miss short putts — they’re like, I felt like I made a great stroke, but it comes out and lips out of the hole from a foot or two feet — it’s because they’re hitting it on an edge.

"So the firmer you hit it, the more the golf ball compresses. So when you’re hitting something a lot harder, it’s compressing and it doesn’t come off at a weird angle.

"When you’re hitting it softer, like a five-footer or like a three-footer, you hit it a little bit off the edges, it can now come off line."

DeChambeau added: "I was looking at different putter designs, like what is going on — I felt like I was taking every variable out of it.

"I was hitting it on my line, and it was still coming off at weird angles. Like I felt like I was stroking it perfect. I used numerous devices that told me my putter was square at impact.

"I was stroking it with a proper club path, proper lie angle, attack angle, all this stuff, whatever. And unfortunately there’s no answer to it.

"That’s when I went and did my research."

NEXT PAGE: GOLFMAGIC SETS BRYSON DECHAMBEAU FIVE CHALLENGES FOR 2022 ON THE PGA TOUR - CAN HE ACHIEVE ALL OF THEM?

bryson dechambeau
PGA tour
Ryder Cup
Tiger Woods
charlie woods
Previous
Is this the MOST excited we've been about a Tiger Woods return for a long time?
Next
"You make NOTHING": Bryson DeChambeau on financial perils of the PGA Tour