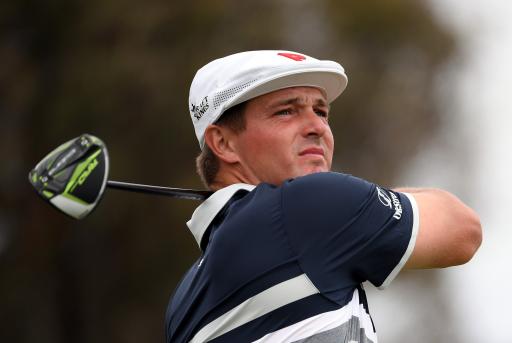 Bryson DeChambeau ripped a monster 480-yard drive down the par-5 8th hole en route to teaming up with Aaron Rodgers to defeat Phil Mickelson and Tom Brady 3&2 in Match IV at The Reserve at Moonlight Basin in Montana on Tuesday.

DeChambeau and Mickelson joined the NFL legends in a modified alternate format match where all four players teed off and each team then chose one of the drives. They then played alternate shot from there until the hole was finished.

WATCH: TOM BRADY CLEAN HIS GOLF CLUBS OUT THE COOLER IN HIS GOLF CART

Out of the gates! @B_DeChambeau and @AaronRodgers12 take the early lead. pic.twitter.com/iR9N8WEojx

The match started with DeChambeau and Rodgers going 1 up on the 1st hole as the 2020 US Open champion chipped in for birdie.

Mickelson and Brady then pulled the game back to A/S with a birdie-three on the par-4 3rd, a hole which saw both Brady and DeChambeau lash driver to inside of 15 feet for eagle.

After inexplicably three-putting for par on the 3rd, DeChambeau and Rodgers compounded the mistake by going 1 down on the 4th hole after finding trouble off the tee, but they quickly responded to draw the match back to A/S on the 8th hole - where DeChambeau unleashed his incredible 480-yard bullet down the fairway.

"I think I did it," said DeChambeau as he unleashed his rocket.

"Oh you more than did it, that's amazing," said Mickelson.

"Some will find that inspiring, and I was off I just feel defeated. Great drive."

Clutch gene. @AaronRodgers12 walks in one final putt to win The Match alongside @B_DeChambeau. pic.twitter.com/WNEJ1zEMRX

With the match A/S at the turn, DeChambeau and Rodgers then stepped their foot on the gas by winning three consecutive holes to take control of the match - much down to Rodgers' clutch putting.

They halved the 13th with bogeys, and they halved the 14th hole in double-bogeys as a result of them playing the hole with one club. In a blind draw, Rodgers chose 3-wood, Mickelson 4-iron, Brady 7-iron and DeChambeau pitching wedge.

Mickelson and Brady, who lost to Tiger Woods and Peyton Manning in Match II, managed to win the 15th hole but then lost the 16th and the match in the process as Rodgers drained a 15-footer to seal the match 3&2.

"I thought we played really well today," said Mickelson. "We made a lot of birdies, shot quite a few under par, but these guys played better."