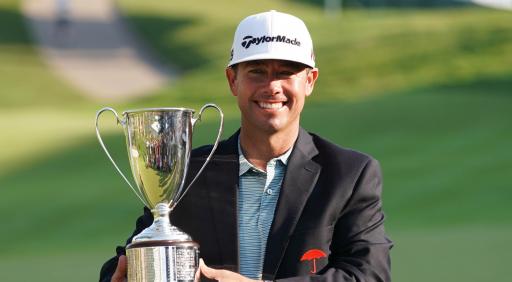 Chez Reavie hung on for his first PGA Tour victory since 2008 with a four-stroke triumph at the Travelers Championship.

Reavie, who finished tied third at the US Open a week previous, led by a commanding six strokes heading into the final day following a sublime Saturday 63 where he played the back nine in 28 shots.

However, the 37-year-old American saw his advantage whittled down to just one stroke ahead of compatriot Keegan Bradley with two holes to play on Sunday night.

The trophy was soon decided though at the penultimate hole as Bradley made a disastrous double-bogey six in contrast to Reavie's clutch birdie to extend the lead comfortably back to four on 17-under par.

It was pars all around at the last as Reavie saw out a four-stroke triumph over Bradley and Zach Sucher, who at one point led by five strokes on Saturday afternoon.

Paul Casey's love affair with the Travelers continued despite not winning with a tie for fifth on 11-under par, while Jason Day and Bryson DeChambeau finished back in tied eighth on 10-under par.

Reavie picked up his first tournament win since the 2008 RBC Canadian Open and vaults up to a career-high 26th in the world.

CHEZ REAVIE - IN THE BAG