After enduring years of pain, Nate Lashley runs away with the inaugural Rocket Mortgage Classic by six strokes. 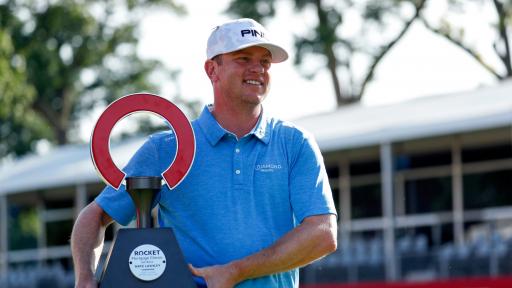 A decade and a half after losing his parents and girlfriend in a plane crash, Nate Lashley completed the comeback of all comebacks by winning his maiden PGA Tour title at the inaugural Rocket Mortgage Classic.

Not even qualified at the start of the week, Lashley, 36, relied on a fellow Tour pro's'withdrawal on Tuesday morning to even make his way into the tournament itself.

Fresh off a respectable tie for 28th at the US Open, Lashley knew his game was in great order and he proved that to everyone by trouncing the field by six strokes on 25-under par following two rounds of 63 on Thursday and Saturday, a 67 on Friday and a final-round 70.

"I really wanted to get into this tournament because I felt like I had a good week of golf in me," said Lashley after his Saturday 63 which saw him take a six-stroke lead into the final round.

"To not be able to Monday qualify was disappointing, but thankfully I got a break and made my way in."

Nobody could deny Lashley some good fortune. Not after what he went through 15 years ago.

Playing golf as a 21-year-old junior at University of Arizona, Lashley travelled over to Oregon for an NCAA regional tournament where his parents Rod and Char Lashley flew over to watch their son play along with his girlfriend Leslie Hofmeister.

Just hours after the final round and saying their goodbyes, all three died when a plane, piloted by Rod, crashed in a remote part of Wyoming.

They were with him every step of the final round, as Lashley, who maintained his six-stroke advantage after 54 holes all the way to winning line after signing for a final-round 70.

Watch Lashley's emotional post-round interview in the video below...

“I’ve been through a lot,” Lashley said. “It took a lot of years for me to get over my parents’ death, for sure. It was mentally holding me back for a long time.

“I think about my parents all the time. I was getting a little emotional even walking up 18, even before I hit my second shot, thinking about my parents. Because without them, I wouldn’t be sitting here right now.”

What makes Lashley's victory all the more incredible is that he got so frustrated with golf that he gave up the game in 2012 to study for his real-estate license.

He then dusted off the clubs later in the year and started to rebuild his life and career on the PGA Tour Latinoamerica where he spent two years plying his trade.

A move his older sister Brooke believes was the turning point in his career.

“I have to say, I think the Latin America Tour is what changed the trajectory of his career,” said Nate’s older sister, Brooke, who was one of a number of family and friends to fly over to Detroit to watch Nate's maiden PGA Tour victory in Detroit.

“I’m sure it wasn’t easy traveling internationally and being in foreign countries, and the language and all of this, but I think it really gave him an opportunity to really focus in. It gave him a ladder up.”

As tough as it all was for Lashley to accept, golf became his escape from reality.

“It’s a career-changing event, getting a win out here,” said Lashley, who now vaults from 346th in the world to 101st, as well as to 40th in the season-long FedEx Cup race.

“You really can’t put into words how much this means. It’s just huge for my career.”

IN THE BAG - NATE LASHLEY