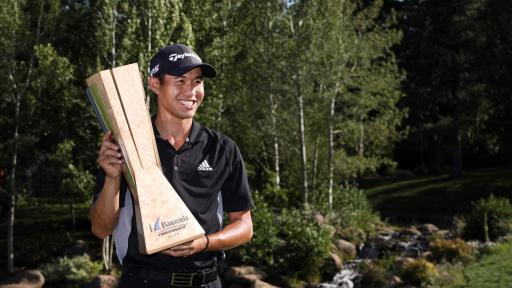 The American now has a two-year PGA Tour exemption and will compete in this year's FedEx Cup Playoffs.

Morikawa started the final round four points behind Merritt but carded a 14-point total on Sunday, finishing with three consecutive birdies, to finish on 47 points for a three-point victory.

"To be in that position is what I've wanted to do all summer," said Morikawa.

"To finally have the lead, it was out of my control. You don't always want that, but it was something really special to finally get the win. To have my family out here, my girlfriend and some friends, just makes this week so much more special."

The TaylorMade staffer was in imperious form off the tee finding 86% of his fairways with his M5 driver, and he ranked fifth in greens in regulation (79%) with his P730 irons.

Morikawa has played in six tournaments on the PGA Tour this season and has not finished worse than 36th, with his last three tournaments resulting in a tie for second, fourth and first.

But he is not prepared to rest on his laurels as he looks ahead to the lucrative end-of-season Playoffs.

"I think the gates are open," said Morikawa. "I've been knocking on the door the past month or so, and the game's been feeling good."