WATCH: Sergio loses the plot for a second week running - is it really time for a ban? 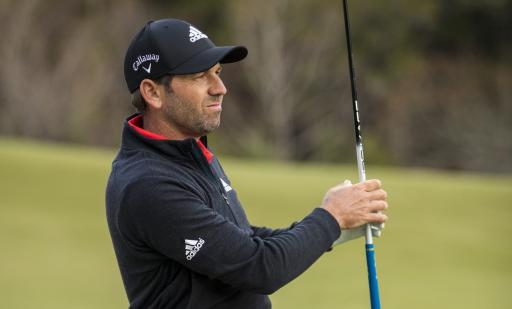 Sergio Garcia was caught TEARING UP a tee box during the WGC FedEx St Jude Invitational last week, marking the second tournament in a row where he has lost his cool following an errant tee shot - and now it's been revealed in a Telegraph article that a number of PGA Tour players want the Spaniard BANNED after watching back his latest tantrum.

Garcia was seen gouging the turf with his driver on the 16th tee during the third round as he watched his drive sail 299 yards into the first cut of rough.

The Spaniard went on to make a par on the hole and would eventually finish 1-under for the week in a tie for 40th.

"We are starting to wonder what Sergio has to do to get a couple of involuntarily weeks off," a leading PGA Tour player told Telegraph Sport on Monday.

Another unnamed Tour professional told GolfMagic on Wednesday: "Something needs to be done... Sergio needs to be disciplined in some way.

"It's not the first time he has thrown a tantrum this year. Not too long ago he was apologising in the Saudi Arabia tournament for his antics.

"Fining him is not going to bother him as much as some kind of suspension."

He added: "The problem is that there's a fine line because he's such a passionate player, which he shows time and time again at the Ryder Cup, but sometimes he crosses the line. He's such a nice guy off the course as well."

The incident marks the second consecutive week where Garcia has lost his head on the tee.

Two weeks ago at The Open at Royal Portrush, Garcia was seen tossing his club aggressively towards his caddie, who just happened to be his brother Victor. Perhaps it's just how Sergio shows his affection for his brother, but we think not...

WATCH: SERGIO TOSSES GOLF CLUB AT HIS CADDIE AT THE OPEN

By no means are we singling Garcia out as the Tour's bad guy, but his petulance is certainly doing himself, and the game, no favours. We'll throw the names of Matt Wallace, Tyrrell Hatton and Patrick Reed into this paragraph too.

While we can't be sure what warnings have been set by the Tour when it comes to player tantrums, especially when someone rips up a tee box that others have still got to play on, you have to feel like a fine or a docking of points must now be implemented by the Tour to stop Garcia - and his other hot-headed friends - from doing this on a regular basis.

It marks the third time the 10-time PGA Tour winner has been in the headlines for his actions in 2019 having been disqualified from the European Tour's Saudi International for "serious misconduct" after "intentionally" damaging putting surfaces.

Garcia was also seen aggressively smacking the sand multiple times in one of the greenside bunkers.

"I feel terrible about it," said Garcia following that tournament. "I’ve been thinking about it for the last week, every day. I’m an emotional player. That emotion is probably my biggest strength, but it’s also one of my biggest flaws.

The former Masters champion also found himself in the headlines this year when playing his part in a controversial gimme incident with Matt Kuchar at the WGC Match Play.

Garcia has consistently proven one of golf's hot-heads on Tour.

In the past, the Spaniard has been caught launching clubs into the water and bushes, swearing, snapping clubs and even tossing his golf shoe into the crowd during the CISCO World Match Play when it was held at Wentworth back in the day.

You can watch some of his most memorable strops in the video below...