Morikawa was not best pleased after hearing what Immelman had to say about his golf career so far on the PGA Tour. 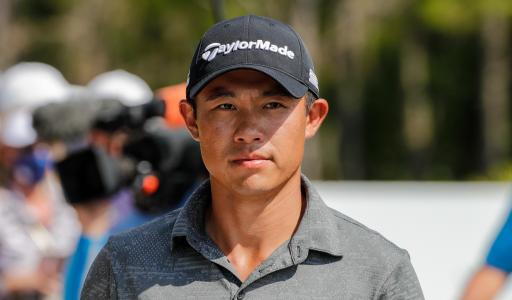 Collin Morikawa was fuming during his post-round interview at the World Wide Technology Championship at Mayakoba after being told what commentator Trevor Immelman had to say about his golf career thus far.

Golf Channel's Todd Lewis was speaking to Morikawa moments after the two-time major champion signed for a third-round 68, which left him just inside the top 20 heading into the final round in Mexico.

Related: Collin Morikawa says he "feels old" as he opens up on "stressful" year

After briefly discussing his superb 63 on Friday and a solid 68 on Saturday, Lewis then asked Morikawa the following question:

"You know, Trevor Immelman mentioned it in our broadcast when watching you play, that you came out and played so well early in your career that that was possibly your bar, your standard, did you go through that?"

Morikawa first smiled, appeared a little shocked, and then responded:

"Wow, that's hard to hear from him.
"To be honest, I could care less what he says there because I don't think that's my bar.
"I think I've got so much more to improve. I've been near last on putting and I don't think I've even finished close to being average on putting. If I just get my putting to be average I think there is so much more to improve.
"So I don't know, I don't know where that came from but that kind of stings there, I don't like to hear that."

Lewis followed up with:

"He made it as a compliment that you had played so well."

"I don't know if that was a compliment, I'll be honest. If he did, maybe it came off wrong from what I heard.
"For me, I've never seen a ceiling. I just want to keep improving. Obviously we took a couple of steps back this year but it's just trying to get better every day and improve on little things.
"I expect myself to play well, I set high goals for myself and it just sucks when they don't come through."

Immelman was sat in the commentary box listening to Morikawa's every word on the live broadcast.

He considered it a miscommunication.

The 2022 International Presidents Cup captain said he would be phoning Morikawa later this evening to discuss exactly what he meant.

"Yeah I believe he misunderstood what I said.
"What I was saying was that he got off to such an incredible start in the early part of his career, winning two majors quite quickly, in a lot of ways you start to put extra pressure on yourself to keep that up.
"I think that extra pressure wasn't really needed. Maybe take a step back, get some perspective, understand how incredible that is and then just let that come to you a little bit more.
"We all know how great he is. I've been saying over the last couple of days how I anticipate he will get back on a run like that.
"But don't put too much pressure on yourself, because he's been saying a lot of times the last few weeks that maybe his swing hasn't felt as comfortable, but when I look at the stats last season, he's still third in strokes-gained approach and that is a massive weapon. It's an incredible asset to have to your game.
"Maybe a little miscommunication there. I'll be giving Collin a call later today."

Morikawa burst out the blocks when joining the PGA Tour with victory at the 2019 Barracuda Championship, a points-scoring tournament.

He then followed that up with victory at the 2020 Workday Charity Open at Muirfield Village during the Covid lockdown, shortly before winning his first major championship in just his second major start at the US PGA Championship.

Morikawa was the third youngest golfer to win the US PGA Championship when he won it aged 23.

He then won the 2021 WGC Workday Championship, five months before going on to win his second major title at The Open.

Morikawa, 25, has not won anywhere around the world since etching his name on the Claret Jug last year.

The five-time PGA Tour winner has begun working with putting instructor Stephen Sweeney this week at Mayakoba in a bid to improve his stats on the greens heading into 2023.

Next Page: Seamus Power makes a hole-in-one, then holes out another two times on day three at Mayakoba