Could Bryson DeChambeau's driving range REVELATION take him to the next level?

"I never thought I was going to figure this out - At least now, I can sleep!" 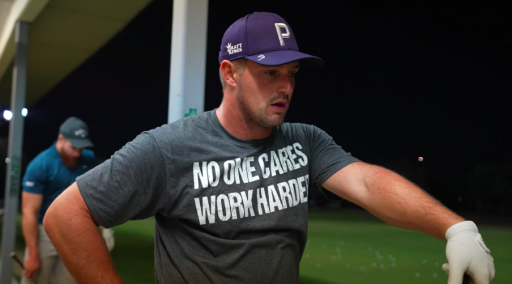 Bryson DeChambeau's scientific analysis of his golf swing is never more evident than on his YouTube channel and he believes he has made a monumental discovery.

In one of his latest uploads, DeChambeau goes to The Highlands Performance Centre in Carrollton Texas with Long Drive superstar Martin Borgmeier.

The former US Open champion has a neverending hunger to improve and while hitting shots at Golden Bear Drive, he made a discovery that left him gobsmacked.

"I never thought I was going to figure this out," said DeChambeau. He seemed genuinely shocked as he explained to Borgmeier what he had discovered.

The 28-year-old said that when he swings down, he should have his right wrist behind his right forearm, as opposed to inside of his right forearm. This allows DeChambeau to have a smoother transition with his hands to deliver the clubface.

As you can see in the image below, DeChambeau does not want the section on the left because he said this will lead to an open clubface, which causes a slice.

The section on the right shows a better position with his hands and arms. If only we all had the brain DeChambeau had, we could save hundreds of pounds on golf lessons and just teach ourselves.

It is this type of self-analysis that the eight-time PGA Tour winner encourages all of his fans to do, whether it is with their feet, their arms or anything else.

"All these different things, you just have to try it. As much as you want a coach to tell you what to do all the time, you’ve got to figure out what works and what is comfortable for you," said DeChambeau.

"My whole premise in golf is if you don’t hit a ball well with your thought process in the first two or three shots, it’s not working."

It is no wonder that he is called 'The Scientist', but you cannot fault his strategies. He is a major champion and he will no doubt achieve more success as his career progresses.

In his excitement, he rang his coach from Dallas National Chris Como to tell him the good news. Como also worked with Tiger Woods between 2014 and 2017.

The depth of detail that DeChambeau and Borgmeier went into regarding their swings in the video is absolutely staggering and as Borgmeier says, it just shows how difficult golf can be.

NEXT PAGE: GREG NORMAN EXCITED ABOUT GROWING GOLF VIA ASIAN TOUR INVESTMENT : "I LOVE IT"