DeChambeau shot a 5-over par opening round at The Concession and golf fans took to social media to discuss the reigning US Open champion. 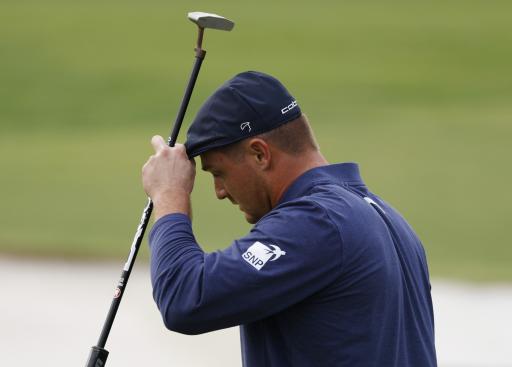 Bryson DeChambeau got off to a shocking start at the WGC-Workday Championship on Thursday, shooting a 5-over par opening round, causing golf fans to discuss his big-hitting antics on social media.

There's no denying that what DeChambeau has been able to accomplish with his body is impressive and some of the numbers he is able to produce are quite astonishing, but his performances as of late are nowhere near the level that we expect of the reigning US Open champion.

"I expect he'll start to rein it in," said Sky Sports Golf commentator Ewan Murray on Thursday. "His performances lately have not been good and it's just not working."

It was an interesting comment from Murray, who clearly believes that DeChambeau will struggle to find success unless he stops chasing the big numbers in terms of speed and distance.

DeChambeau ranks 1st in the PGA Tour's Strokes Gained Off The Tee statistics and although he isn't the most accurate with a driver, it's certainly giving him an advantage over the rest of the field.

His putting on the other hand is an area that seems to have weakened, with the 27-year-old currently 113th in Strokes Gained in that statistic.

During Thursday's first round at The Concession in Florida, DeChambeau started in steady shape and was level par thorugh his opening nine holes, but back-to-back bogeys at 10 and 11 were followed up with another at the 14th, before his tee shot at the par-4 16th found the water and led to a triple-bogey 7.

DeChambeau missed the cut at last week's Genesis Invitational, but due to this week's event being a WGC tournament, there is no cut mark, so DeChambeau will play all four rounds unless he withdraws.

That being said, the American still won't like seeing his name so far down the leaderboard and his poor performance on Thursday had a lot of golf fans mentioning his name on Twitter.

Bryson DeChambeau comes close to clobbering a couple of marshals with a tugged drive yet not even an attempt to shout 'fore'. I get more annoyed every time I see any player ignore a basic thing in the game #fore

There’s absolutely no reason to swing as hard as Bryson Dechambeau just swung.

Still 3 rounds to go. Not quite dead last but close. pic.twitter.com/KxdWWcwM6H

So @MattFitz94 @webbsimpson1 are supposed to be shorter hitters ?@b_dechambeau looong - look at the stats for first round @WGCWorkday and decide what is more important in your golf strategy #stayhard

Is it too soon to call the Dechambeau distance/hulk experiment an epic failure??

Bryson DeChambeau still hasn't learned that the object of the game of golf is to get the ball into the cup in the fewest strokes NOT how far you can hit the ball.

Yeah and he keeps missing cuts!