Tiger Woods and Charlie Woods back in famous Sunday Red shirts for the final round of the PNC Championship. 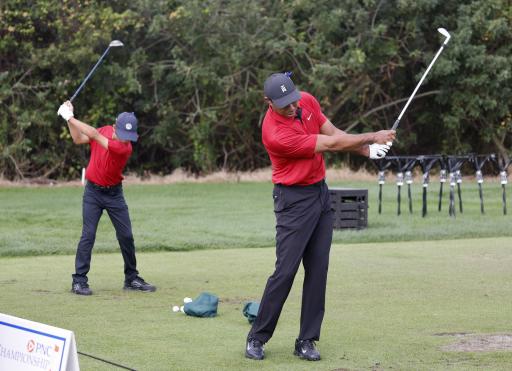 Golf fans have been reacting to seeing Tiger Woods and his 12-year-old son Charlie Woods in their famous Sunday Red colours ahead of the final round of the PNC Championship.

Woods is making his first competitive start of the year having been recovering from serious leg injuries sustained during his horror car crash in Los Angeles back in February.

Some had questioned whether Woods would ever play the sport again following his car accident, but 10 months on the 15-time major champion is back inside the ropes.

RELATED: TEAM WOODS OFF TO FAST START AT THE PNC CHAMPIONSHIP

After all of the anticipation as well as their participation in the Pro-Am on Friday, the popular Woods duo took to the course in Orlando on Saturday to shoot an impressive scramble score of 10-under 62.

That leaves them in the hunt for the title at just three shots behind Stewart Cink and his son Reagan.

Tiger and Charlie are sat in tied fifth place alongside five other pairs including nine-time major winner Gary Player and his grandson Jordan.

They are now gearing up for the final round as they go in search of their first win in the annual 36-hole tournament.

Team Woods are out with Team Kuchar for the final round.

Here's how golf fans have been reacting to seeing Woods back in his famous Sunday Red alongside his young cub.

"This brings a tear to my eye."

"Tiger on the prowl, things you love to see."

"Genuinely thought he was done after the car crash, unbelievable comeback story yet again."

"What an amazing recovery, so happy to see Tiger back on the course with a smile again."

"But why the Pumas?"

"How come Charlie is not with Nike anymore?"

"Gotta drop that money for Charlie to rock the swoosh."

NEXT PAGE: CHARLIE WOODS WALKS IN PUTT AND CELEBRATES JUST LIKE TIGER!