Charlie Woods WALKS IN PUTT and celebrates just like Tiger!

Charlie Woods provided an image of his father from years gone by in the first round of the PNC Championship. 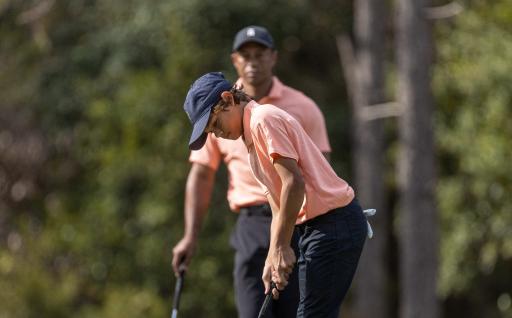 Tiger Woods must have thought he was looking in the mirror when his son Charlie rolled in a long putt and celebrated in a way only a Woods can in the first round of the PNC Championship.

On the 4th hole at the Ritz-Carlton Golf Club in Orlando, both Team Woods and Team Thomas took dead aim. Justin Thomas almost made a hole-in-one as his ball stopped less than a foot short of going in.

Then Charlie, 12, stepped up and although he seemed to strike his shot nicely, he wasn't happy and pulled his club back in disgust.

The young superstar's ball finished about 15 feet from the hole. With Team Thomas in the hole for a confirmed birdie, Tiger and Charlie wanted to step.

Charlie sent his putt on its way and he began walking before the ball went in. As the ball dropped in the left-hand lip, he lifted his putter with his left hand to celebrate.

It is fair to say that he may have learned that celebration from his 15-time major winning father. With this birdie, the Woods duo went 3-under-par after four holes, the same score as Team Thomas.

They reached the turn at 4-under-par after picking up another birdie at the 5th hole. At this stage, they were seven shots behind Stewart Cink and his son Reagan.

They finished seventh last year at the PNC Championship, five shots behind the Thomas'. They used the Pro-Am on Friday to warm up for the tournament. They teed it up with Matt Kuchar and his son Cameron.

After the Pro-Am, Woods was visibly tired and he laid down on the driving range while he watched the enthusiastic Charlie hit even more balls.

NEXT PAGE: JORDAN SPIETH'S NEW PUTTING TECHNIQUE COULD TAKE HIM BACK TO THE TOP!