Hideki Matsuyama in line for $600 MILLION in endorsements 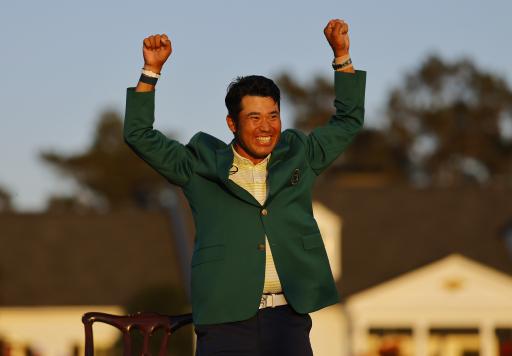 Hideki Matsuyama's historic Masters triumph at Augusta National on Sunday is more than likely going to earn him a staggering $600 million in endorsements for the rest of his PGA Tour career.

Matsuyama, 29, entered the record books last week as he became the first Japanese player to win a men's golf major with his one-shot victory over Will Zalatoris.

According to sports marketing expert at Baker Street Advertising, Bob Dorfman, the six-time PGA Tour winner will now take his earnings through the roof as a result of slipping on the famous green jacket.

"Barring any career-ending injury or scandal, I'd say a Masters win is easily worth $600 million for Matsuyama," Dorfman told Sportico.

He also estimates Matsuyama's victory will now be worth $20 million a year off the course and could last 30 years through his PGA Tour and Champions Tour career, should he choose to continue playing the sport to the age of 60.

"Hideki will be an icon in his golf-mad country."

Matsuyama, who ranks 32nd in career earnings on the PGA Tour with more than $33 million in the bank, was already the most popular endorser in the Japanese game with the likes of Srixon, Lexus and Nomura Securities sponsoring him. Those deals are estimated to earn him around $10 million a year off the course.

The newly-promoted World No.14 won just over $2 million for winning The Masters, however, he won't actually take home the $2.07 million first prize due to his prize being subject to both federal and Georgia tax laws (as Matsuyama spends at least 183 days a year in the United States on the PGA Tour, so he would be taxed as a US resident). The federal rate equates to 37%, with the top Georgia rate at 5.375%.

Matsuyama, according to reports, is estimated to earn $1.19 million for winning The Masters after having paid taxes.

His net worth prior to his Masters victory was in the region of $35 million, but that figure will rise significantly over the coming years.

Previous
Collin Morikawa reveals why he thinks the PGA Tour youngsters are shining
Next
Dustin Johnson: "Driving distance IS NOT important"