Jordan Spieth is going to be a Dad for the first time. 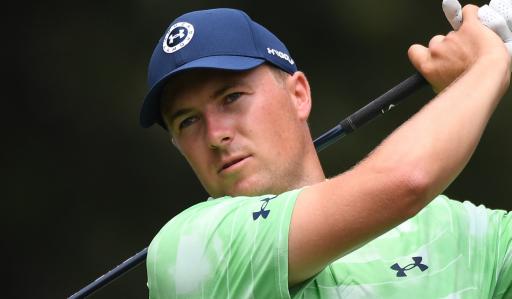 Jordan Spieth has revealed he and his wife Annie are expecting their first child in November.

Spieth, 28, confirmed the news at this week's Tour Championship on the PGA Tour where he currently lies 12 shots off the pace heading into the final round at East Lake.

RELATED: WHO IS JORDAN SPIETH'S WIFE?

"We’ve known since March. It’s been a really cool year. We’ve been blessed on many fronts.

"Overjoyed that everything has gone well so far. So it should be an exciting fall with the Ryder Cup and (the birth)."

"We weren’t like hiding or anything like that, it was just more private life. But, yeah, very excited," Spieth told the media.

"She feels great, that’s the number one priority and everything’s going smoothly."

Spieth did not automatically make the US Ryder Cup side, but he is all-but assured of one of Steve Stricker's six captain picks.

He also expects to be playing alongside his good friend Justin Thomas at Whistling Straits.

"Me and Justin have been joking with Strick for quite a while now about sending him our best ball scores when one of us plays really well and the other doesn’t," said Spieth.

"And I feel like Justin might withdraw from the team if he doesn’t pick me, so I feel pretty good about it.

"But, I mean, you don’t ever want to rely on a pick, but when we have talked, I think he’s got, it’s going to be tough.

"There’s a number of guys for a number of spots. Obviously Harris (English) has played really well, too, in that 10 spot. I think I’m in the 9. But then you got some options to close out the team, I think, and which is good. Competition is good and what a difficult top 6 to make."

NEXT PAGE: GOLF FAN PICKS UP BRYSON'S BALL AND RUNS OFF WITH IT