Fan picks up Bryson DeChambeau's ball and walks away with it 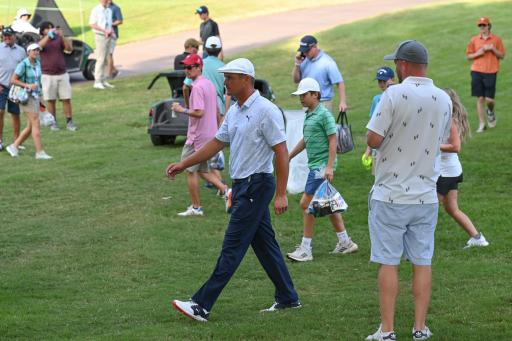 A golf fan snatched Bryson DeChambeau's golf ball on day three at the Tour Championship on the PGA Tour.

DeChambeau ripped a drive off the 18th tee but sent it way left down the 10th hole into the rough next to the 11th tee box.

DeChambeau was not able to locate his ball under the allocated three minutes searching time, but after a PGA Tour rules official reviewed the footage, it was understood that a fan had picked up his ball and walked away with it.

RELATED: WHO IS BRYSON DECHAMBEAU'S GIRLFRIEND?

The scientist gets creative. pic.twitter.com/2mpePCXCIi

The big-hitting American was able to take a free drop and he went on to find the green in two - becoming only the fifth player to achieve that feat in the tournament's history.

DeChambeau made birdie as he signed for a round of 72.

He finds himself on 9-under par and 11 shots off the pace in his bid to win the FedEx Cup for the first time in his career.

DeChambeau declined to speak to the print media for a 15th consecutive round.

NEXT PAGE: RULES CONTROVERSY SURROUNDS DAY ONE AT THE SOLHEIM CUP