Jordan Spieth and Matt Wallace race to the front at the Texas Open, with course specialist Charley Hoffman tucked closely in behind... 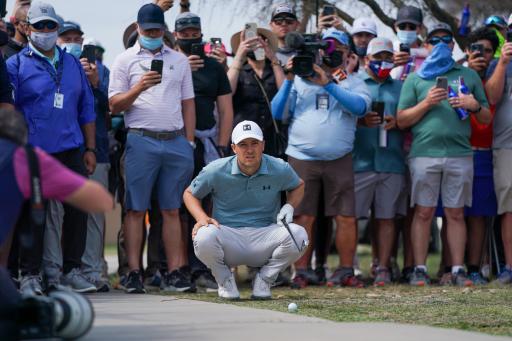 Jordan Spieth and Matt Wallace moved into a share of the 54-hole lead at the Texas Open after both carding rounds of 67 at TPC San Antonio.

Spieth surged late with five birdies on the final seven holes, while his playing partner Wallace matched him with three birdies on the last four holes to move to 12-under par for the tournament.

For Spieth, the final round will provide a golden opportunity for the American to land his first victory on the PGA Tour since the 2017 Open Championship, while England's Wallace will look to win his first career title on the PGA Tour.

Spieth arguably played the shot of the day from right of the green at the short par-4 17th, flopping his ball up into the air and down to within two feet of the cup for a birdie.

Charley Hoffman raced into contention for a second Texas Open title following a best-of-the-day 65 to vault up to 10-under par.

Hoffman, who won the last of his four career PGA Tour titles at this event in 2016, played his final seven holes in 6-under, highlighted by a stunning eagle on the par-5 14th from five feet.

Cameron Tringale, who held the 36-hole lead, stumbled with a round of 73 but the American remains in contention for his first PGA Tour title in his 297th start on 8-under par.

Anirban Lahiri moved up into solo fifth on 7-under, with Tom Hoge, Gary Woodland, Lucas Glover and Matt Kuchar a further shot back on 6-under par.