Jordan Spieth after Valero Texas Open victory: "My wife has been just a rock to me." 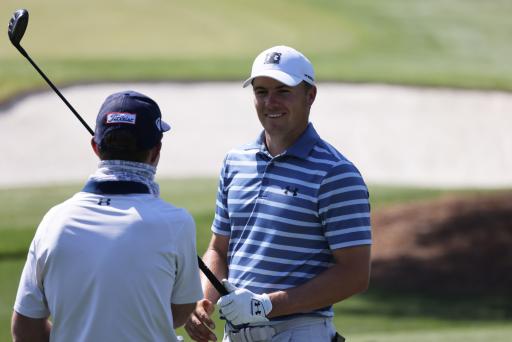 Jordan Spieth said the incredible support from his wife Annie played a crucial role in his PGA Tour resurgence, after he ended his 1,351 day wait for another victory.

It's been a brilliant start to the year for the 27-year-old, who had knocked on the door multiple times already in the past few months and Spieth finally got the win he was looking for at the Valero Texas Open on Sunday.

After getting the job done at the 18th green at TPC San Antonio, Spieth was greeted by his childhood sweetheart and wife Annie, who was crying with joy after seeing her husband get the win he so desperately wanted and deserved.

"She got me emotional there on 18, seeing her emotional running up," Spieth told the media following his 12th PGA Tour victory. "I can pinpoint a number of different moments where I’ve been in a bad place. And I can picture some moments where have been talking so positively to her coming home and having her help progress that forward.

"She’s just giving me a lot of space. I’ve asked, I’ve said look, I’m gonna have to put some long hours in. Even longer than when you’ve known me before. This is what I want right now. We don’t have a family yet. I really want to get back to playing consistent golf and just being me and playing with freedom.

"She’s just been that person that said, whatever you need to do, I’m here to support you. Let me know how I can help. Let me know when too much is too much. Let me know if it’s not enough. Yeah I mean, she’s been really unbelievable.

"I’ve had people in my corner that have always believed in me even when I’ve believed mess in myself. I just feel a lot of gratitude to those who have helped me get back here. My wife has been just a rock to me.

"This is my first win since we’ve been married, so it’s been progressing this way since December. Before that there was a lot of tough times. When you’re struggling at work you try not to being it home and that kind of stuff. I’m very grateful for the people I have around me."

Spieth will now attempt to add another major to his tally of three, as he tees it up at Augusta National at The Masters, where he has leapt above the likes of Rory McIlroy, Justin Thomas and Jon Rahm to become the third favourite with the bookmakers, behind only Bryson DeChambeau and defending champion Dustin Johnson.

NEXT PAGE: Bryson DeChambeau RIPS DRIVER BOMBS one after another on Masters range!