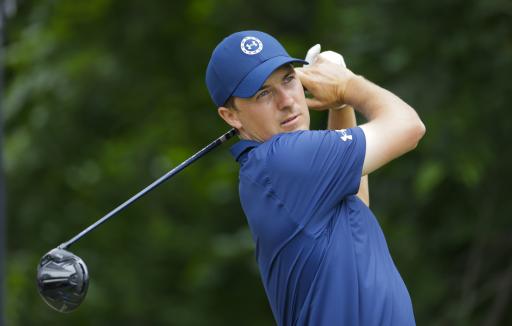 Jordan Spieth has told the media ahead of this week's Memorial Tournament at Muirfield Village how he HATES it when people say 'he's back' on the PGA Tour.

Spieth has shown something of a resurgence at least in terms of results on the PGA Tour this season with a first victory in nearly four years at the Valero Texas Open in April.

The three-time major champion has since followed that up with three top-10 finishes in his last four starts, including a runner-up spot to Jason Kokrak at the Charles Schwab Challenge on Sunday.

Spieth led Kokrak by one shot heading into the final round but carded a very disappointing 3-over 73 to finish two shots back of his compatriot.

"I need to get back on track, just tighten things up," Spieth told the media ahead of this week's Memorial Tournament at Jack Nicklaus' Muirfield Village.

"I just got a little loose, and it was kind of on Friday afternoon, after the delay, I came out and I told Michael (Greller, his caddie) within the first couple holes after that I was like, ‘Man, I’m moving different, I’m swinging different.

"It was just a different feeling going into Sunday than other ones that I had played well or played poorly in throughout this year. I just knew that I was a little off and I was going to have to try and make it work and that’s just a tough thing to do around a tricky course."

Despite vaulting up to 23rd in the world rankings, a dramatic improvement from sitting narrowly inside the top 100 at the start of the year following an indifferent run of results in 2019 and most of 2020, Spieth does not consider "he is back" at all.

In fact, the former World No.1 does not even consider he has been away.

"The only thing that I care about looking backwards is mechanically matching up to what I was doing," said Spieth, who has won 12 times on the PGA Tour.

"As far as any kind of comparisons to years or results, it is literally the last thing that’s on my mind. I hate the word ‘back,’ I hate that, ‘He’s back.’ I never went anywhere. This is all part of what happens in a career. There’s ups and downs.

"And I like looking forward and to what are the pieces that I need to put together for this kind of this jump start, this new kind of way that I want to be playing golf week-in and week-out. Focus forward with picking apart things in my DNA that have made me successful."

Spieth starts as one of the tournament favourites at this week's Memorial Tournament in an elite field that includes the likes of Jon Rahm, Rory McIlroy, Bryson DeChambeau, Justin Thomas, Collin Morikawa and Xander Schauffele.

Rahm won the tournament 12 months ago following a three-stroke victory over Ryan Palmer on 9-under par.

NEXT PAGE: TOM WATSON ADMIRES PHIL MICKELSON'S CALVES AND HOW HE STILL HITS BOMBS AT 50!

Jordan Spieth
under armour
PGA tour
Memorial
US PGA
Previous
Tom Watson ADMIRES Phil Mickelson's CALVES and how he still HITS BOMBS!
Next
Memorial Tournament 2021: Groups and UK tee times for Round 1 and 2