Golf legend Tom Watson was as excited as the rest of us when Phil Mickelson won this year's PGA Championship at Kiawah Island. 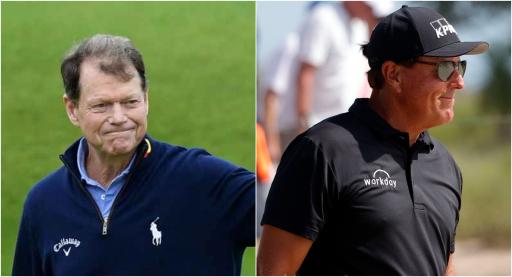 Mickelson became the oldest major winner in golf history at Kiawah Island, fighting off Brooks Koepka and Louis Oosthuizen to pick up his 45th win on the PGA Tour.

Lefty's calves have become somewhat of a craze amongst golf fans to the point where one fan had Mickelson tattooed on to his left calf after his historic win.

RELATED: PHIL MICKELSON RESPONDS AS GOLF FAN GETS PGA CHAMPION TATTOOED ON TO HIS CALF

Speaking to GolfMagic and a number of other golf media, Watson believes that the 50-year-old can continue his fine form as he gets older, with his long game and short game continuing to excel.

"Look at Phil, he's the number one guy," said Watson.

"He just proved that he could do it. There are a few others but you look at Phil, he's got the length, he's got the short game and obviously the desire because he keeps working on his body. Look at his calves!"

The Ocean Course at Kiawah Island was the longest course in major championship history and windy conditions also meant that it provided a stiff test for the players.

Mickelson will head to Torrey Pines for the US Open later this month in pursuit of becoming only the sixth player in history to complete the major grand slam.

Although Lefty was not one of the favourites heading into the PGA Championship, Watson believed that he was capable all along and wasn't surprised at his win.

"I thought it was wonderful but it didn't surprise me," Watson added.

"The up-and-down he made at 18 on Saturday, the bunker shot he holed on the 5th hole on Sunday, that's typical Phil Mickelson. He's the best short game player in the world and it didn't surprise me that he ended up winning the tournament."

NEXT PAGE: TOM WATSON: "TIGER WOODS WILL BE BACK PLAYING GOLF BEFORE THE OPEN IN 2022"