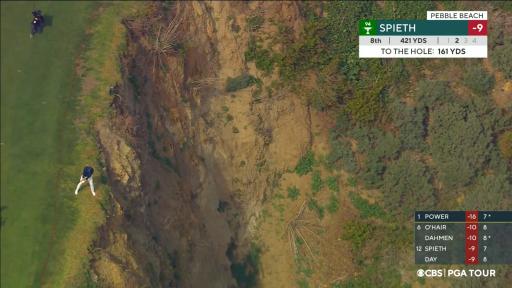 Jordan Spieth risked his own life to play an incredible shot from off the clifftops at the iconic par-4 8th hole at Pebble Beach.

Spieth's tee shot raced down the fairway and was fortunate to remain in play as it nestled just shy of going down the cliff and onto Pebble Beach.

With his ball on a downslope, Spieth stepped in and played a miraculous shot over the back of the green.

Spieth then chipped onto the green to 15 feet and drained the putt for par.

Spieth then went on to birdie the 9th hole when holing from 20 feet to go out in 31 shots and move himself into contention for the tournament.

The three-time major champion also made a stunning eagle on the par-5 6th when sending his approach shot into three feet.

Here's how golf fans reacted to Spieth's second shot on the 8th:

Can barely watch that Spieth shot. Maybe looked worse from above but yikes, was he not a bad swing away from... you know... death?

Jordan Spieth with a golf shot if he slips he literally would die pic.twitter.com/YYguSkyQ1c

Jordan Spieth willing to risk it all! pic.twitter.com/dCr4DBUAJ5

Jordan Spieth would be the 100% betting favorite to hit a shot, fall off the cliff & still somehow make par at Pebble