Jordan Spieth produced another remarkable moment as he went low at Pebble Beach to move within striking distance of the leaders at the AT&T Pebble Beach Pro-Am. 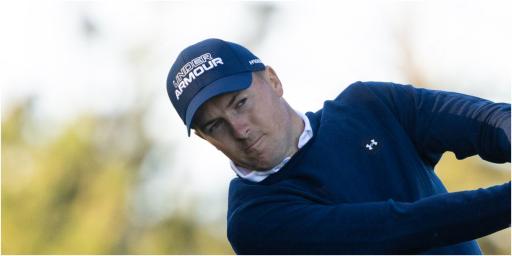 Jordan Spieth produced his own highlight reel as he moved into contention at the AT&T Pebble Beach Pro-Am after 54 holes.

Spieth began his round California in fine fashion and made birdies at one and two before a superb eagle at the sixth hole.

But then at the eighth hole he gave us all another moment we will come to know and love when he finally calls time on his career.

His tee shot motored towards the cliff edge and was fortunate not to fall onto Pebble Beach. But then Spieth took the shot on.

This is genuinely terrifying, on-course commentator Colt Knost said watching on, his heart in his mouth. It was box office stuff.

Spieth just loves to pull off the ridiculous. Of course, this wasn't the same type of pressure he felt at The Open with that shot.

Still, it was suitably impressive. He sent his ball through the green and duly scrambled to save par. Just bananas. What a player.

He wasn't finished there. At the par-3 17th, he hit the flag stick with his tee shot. Then he made the birdie putt.

He closed with a birdie at 18 after missing his eagle putt low. He carded a 9-under 63. And it could have been better.

By the close of play, there were a number of players who could pull off the win at the famous venue.

Andrew Putnam, Beau Hossler, Tom Hoge, Patrick Cantlay and Joel Dahmen could all make a run for the win.

Jason Day isn't too far behind but will need to go really, really low and hope the field comes back to him.