Cameron Tringale hits the front on day two of the Texas Open, but Jordan Spieth remains in contention for his first win in nearly four years... 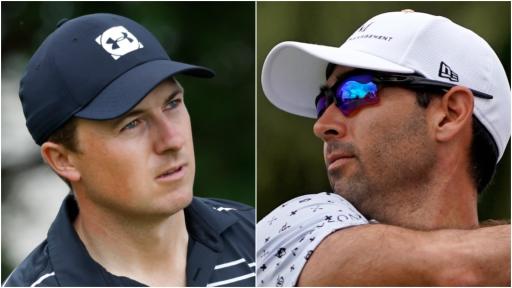 Cameron Tringale hit the front on day two of the Texas Open as the American goes in search of landing his first victory in his 297th start on the PGA Tour.

Tringale, 33, carded a 3-under 69 at TPC San Antonio to move to 9-under par for the tournament and two shots ahead of England's Matt Wallace, who went one better with a flawless round of 68, and US compatriot Jordan Spieth, who carded a 70.

Tringale and Wallace are both attempting to shed their winless tags on the PGA Tour, while Spieth is seeking to clinch his first victory on the PGA Tour since winning the 2017 Open Championship at Royal Birkdale.

WATCH BELOW: LITTLE KID GETS DRAGGED OFF THE FLOOR IN FRONT OF JORDAN SPIETH ON DAY TWO!

Camilo Villegas struggled to maintain his blistering day-one pace, which saw him whizz round in 64 shots, but the four-time PGA Tour winner still remains in the hunt for victory on 4-under par alongside Matt Kuchar, who finished third at last week's WGC Match Play.

Hideki Matsuyama slipped back to 3-under par with a round of 74.

Rickie Fowler bounced back with a 68 but he has it all to do from level par over the weekend. Fowler must win the tournament in order to book his place in next week's Masters Tournament, a major he has never missed in 10 years.

Tony Finau and Phil Mickelson both missed the cut on 3-over and 4-over par respectively.