Koepka and Sims are now officially engaged, but there remains some doubt as to whether the American will tee up at The Masters 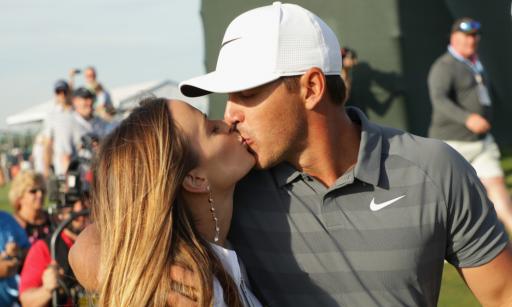 Brooks Koepka and Jena Sims have taken to social media to reveal their official engagement.

Koepka, who won the Phoenix Open earlier this season, proposed on March 3 and 13 days before he had surgery on his right knee.

The pair officially began dating sometime in 2017, but the actress, who grew up watching golf, initially met Koepka at the 2015 Masters.

Speaking of golf's first major of the year at Augusta National, and there appears some doubt that Koepka will be teeing it up on the hallowed turf, especially after what Rory McIlroy's putting coach Brad Faxon recently said during a SiriusXM interview.

Faxon believes the injury is a lot worse than expected.

"I think that's a really tough question to answer," said Faxon. "There was rumours around here, the Honda Classic last week where I live, I was on the range with caddies and talking and I have instructor friends, I think this injury is way more serious than Koepka's letting on.

"I've heard rumours he's out for six to eight months. So I don't think The Masters has a chance.

"I'm not saying I want that to happen for Brooks in any reason. We need him on the tour. He's a hell of a player, but I think he's going to battle this one.

"PCL's a tough injury to get over. Couple that with the other parts of the knee that got injured and we may not know the true story, but I know we're pulling for him."

But Koepka was quizzed on his knee injury earlier this week, and he said: "Progressing nicely and happy how it's going."