So far there are 35 bids for the package the Ryder Cup superstar is selling...and the current bid is $20,000! 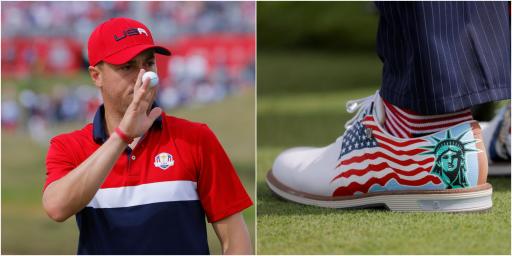 Justin Thomas is auctioning off a package his Ryder Cup gear for his charity.

The Ryder Cup winner, 28, posted on his social media page that the proceeds of the package will go to the Justin Thomas Foundation.

In the package are the shoes he wore throughout the week, a flag signed by all 12 United States players, a shoebag and a headcover.

Thomas was inspired at the Ryder Cup in Whistling Straits and was key to Steve Stricker's side as they smashed the Europeans.

You can track the auction here.

Overall, Thomas, who has won 14 times on the PGA Tour and the PGA Championship, went 2-1-1 for the week near Lake Michigan.

He was one of the emotional leaders of the team and was pumped up as he held putts and stuck it close.

Thomas was caught on camera chugging beers and geeing up the crowd as the United States cantered to a 19-9 victory.

It was the largest margin of victory in the modern era and now Thomas looks like he will take centre stage of this new, young side.

Thomas also hit the golf headlines this week when it was announced legendary carrier Jim "Bones" Mackay will caddy for him full-time.

Thomas has insisted he did not fire his caddy and took to social media to say he is and will remain close friends with Jimmy Johnson.

NOW WATCH: PIERS MORGAN HAS A MOMENT TO FORGET AT ST ANDREWS