WATCH: Piers Morgan has a moment to FORGET on the iconic 17th at St Andrews

Mind the windows Piers... you won't be getting that ball back! 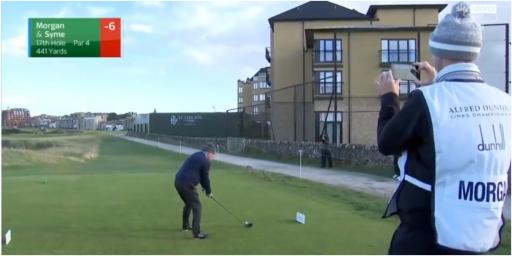 It is simply impossible to write anything about Piers Morgan and do it justice.

The journalist and broadcaster who loves to be the centre of attention has been caught up in so many controversies.

From allegedly hacking phones to using faked images on the front pages of a national newspaper and storming off national television.

Morgan has certainly never been shy of expression his opinion. Or two. Or three. He loves to dish it out. But can he take it?!

Another thing about Morgan that you might not know is that he absolutely loves his cricket and golf.

He's seemingly always involved in the celebrity pro-ams and has been involved in some hilarious moments.

RELATED: CAN YOU DO THIS ON A PUTTING GREEN?

As the United Kingdom loosened its Covid-19 restrictions he took part in a charity tournament with Peter Crouch organised by Paddy Power.

Now he's at the Alfred Dunhill Links Championship and was paired with Connor Syme.

Mind the windows, Piers... ⛳️@piersmorgan experienced a moment to forget at the Alfred Dunhill Links Championship, sending his tee shot out of bounds and hitting the iconic hotel at St Andrews! pic.twitter.com/Bdxgi1I9UG

Morgan's tee-shot on the iconic 17th hole was caught on camera. And it didn't go well.

The 56-year-old looks like he comes down far too step and slices it towards the hotel.

You can see the ball rolling over its roof and at least Morgan saw the funny side of it.

What's that saying? If it first you don't succeed, try and try again.

That is exactly what Morgan did as he had another go.

We're not quite sure how the provisional worked out as Sky Sports didn't show the coverage.

But Morgan posted a video later on his own Twitter suggesting that he "nailed it".

"The crowd want another one," Morgan said after his first, woeful slice.

If at first you don’t succeed… try again… and NAIL it. ⛳️@dunhilllinks #StAndrews pic.twitter.com/XKmm57AEKe