Why wouldn't you rake the bunkers properly on the PGA Tour?! 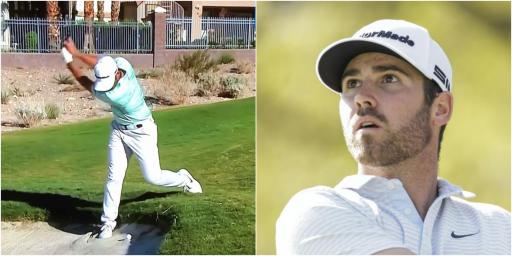 When it comes to raking bunkers you would expect they could get this right on the PGA Tour.

One such player who became the victim of terrible bunker raking etiquette at the weekend was Matthew Wolff.

Wolff, 22, was playing in the fourth round at the Shriners Hospitals for Children Open and trying to chase down leader Sungjae Im.

Standing on the par-5 13th, Wolff found the fairway bunker with his drive and the ball stopped just a foot short of the lip.

Jime "Bones" Mackay was on the commentary for the broadcast and told how Wolff would have been a little bit annoyed with what he came to find.

Bones described the situation as "horrible" as the ball had come to rest in a groove in the bunker left by a bad rake job, and the ball failed to move backwards giving Wolff a greater chance of manufacturing a shot closer to the green.

It was pretty poor form from whoever left the rake in such a state not to give the playing groups behind the courtesy of properly cleaning up.

Wolff got out of the bunker and sent his ball approximately 19 feet.

Bones told the Golf Channel: "The reason this ball didn't release back down in the bunker some 15 feet is it got caught up in a bad rake job.

"So just a nightmare scenario for Matthew, who can't get this ball back to the fairway."

Wolff went on to bogey the hole but made birdies at 15 and 16 but it was too little too late as he finished four shots behind Im.

He told Golf.Com: "I just, I really, I've never seen a break like that."

He added: "For my ball to, someone left the rake at the top of the bunker and it left an indentation and my ball stuck onm that indentation.

"So like I said, just a lot of things that didn't really go my way on the final day."

Wolff made birdie at the same hole on his previous three rounds, so it's easy to understand why this would have really frustrated him.

He took a break from the game to improve his mental health and played superbly this week to finish second.

NEXT PAGE: HOW MUCH MONEY DID SUNGAE IM WIN AT SHRINERS OPEN?