Cantlay stars in one of the hottest microphone fails ever in PGA Tour history. 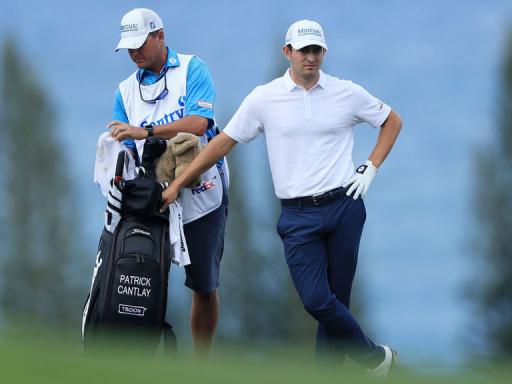 Patrick Cantlay is in hot water with the PGA Tour after he dropped an F-bomb during an exchange with his caddie and playing partner Jon Rahm on the 17th tee during the Tournament of Champions in Hawaii on Friday.

Unfortunately for Cantlay, there was a Golf Channel microphone right next to the tee - and it picked up every single word of his cryptic conversation involving what he was going to be drinking after the round.

SOUND ON Cantlay ready for a Mai Tai #imadebogey

“These pampered f—s need to play... two more holes and we can get a Mai Tai," said Cantlay, the World No.6.

Cantlay's caddie Matt Minister then replied: "I’ll get a Mai Tai, you can have your water."

"Don’t spoil it for me," responded Cantlay.

The conversation led Golf Channel analyst and former US Ryder Cup captain Paul Azinger to comment: "Gosh, he’s not really staying in the moment. He’s already in the 19th hole in his head."

Lead Golf Channel announcer Dan Hicks said: "Talk about unfiltered. They do have to realise that there are live mics around, especially when you’re turning into a star player like Cantlay is."

According to sources, Cantlay does not even drink, and Cantlay's caddie doesn't even like Mai Tai, which makes the conversation even more strange.

Golf.com messaged Cantlay's caddie to learn more about the exchange, but he replied: "Makes it more fun, keep y’all guessing."

Cantlay started his 2020 off in solid style in Hawaii when finishing solo fourth for the week, taking home just shy of $400,000 for his efforts.