Cantlay explains what happened when he was caught swearing on the tee at PGA Tour event in January. 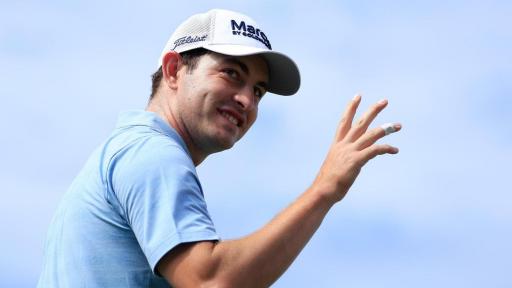 Patrick Cantlay has revealed to No Laying Up exactly what happened when he was caught dropping an F-bomb during Golf Channel's live coverage of the Tournament of Champions in Hawaii earlier this January.

According to Cantlay, who ended up finishing tied fourth that week, the cameras picked up his words midway through a discussion with playing partner Jon Rahm and his caddie Adam Hayes.

They had been discussing how the weather conditions were similar to that of the final round of The Open at Royal Portrush last summer. With no lightning in the area, it was a case of tough luck for the players and they had to carry on battling the elements.

During The Open, a rules official had warned Rahm's group that it had to continue playing as there was no lightning in the area that would force a suspension of play.

That is where the conversation had got to by the time Golf Channel cameras picked up Rahm and Cantlay on the 17th tee in Hawaii.

"I was adding to the story that this rules official was probably waiting his whole life to tell these spoiled-brat tour pros to play," Cantlay told No Laying Up.

"That was his moment at the British Open on Sunday and he was going to be like pumped to get up in your ear and be like, ‘Hey, guys, get going.’"

SOUND ON Cantlay ready for a Mai Tai #imadebogey

Unfortunately for Cantlay, he actually said at the time: "I've been waiting for this weather for 40 years. These pampered f**** need to play."

Cantlay, currently the World No.7, apologised for his comments but admitted he had a laugh about it afterwards.

Cantlay was also heard saying to his caddie Matt Minister: "Two more holes and we can get a Mai Tai."

His caddie replied: "I’ll get my Mai Tai; you can get your water."

"Don’t spoil it for me," said Cantlay.

Cantlay was also asked to set the record straight on that one, too.

"I was kind of making a joke to my caddie before I hit my tee shot that, man, we need to go get a drink after this (long round)," he said.

We have no idea how much Cantlay was fined for his expletive on the tee in Hawaii, but we are fairly certain with the tens of millions he has in the bank right now that he will be okay.