The conditions have been extremely difficult in Bermuda this week, not to mention the tough greens at Port Royal Golf Course. 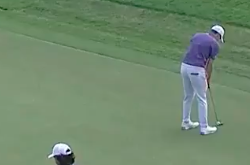 The Butterfield Bermuda Championship has posed challenges and conditions that some of the players of never seen the like of.

Matt Fitzpatrick described the wind as the hardest he has ever played in and Russell Knox said that it will be a week that the players won't forget in a hurry.

Play was briefly suspended during the first round of Thursday as a result of inclement weather and high winds. Fitzpatrick commented on how he creamed a drive on one hole that went 245 yards when his season average in 2021 was 295 yards.

But it is not only the weather that has presented serious challenges at Port Royal Golf Course, the terrains and contours of the course have been tough to negotiate.

RELATED: BRIAN MORRIS ON EMOTIONAL PGA TOUR DEBUT IN BERMUDA: "IT'S BEEN A RIDE!"

On one hole, an unfortunate player had a tricky downhill putt which he would have been happy to get within six feet of the hole.

The commentator made the difficulty of the putt clear when he said that the player would find it tough to keep the ball on the green.

As it turns out, the player found it very tough to keep the ball within 20 yards of the hole. As he struck his putt, the ball caught the main downslope of the green and just kept rolling.

The fate of the shot was soon confirmed. The ball continued to roll and fell off the front of the green. The ball went out of sight for a moment but then reappeared in a position that must have been at least 20 yards from the hole.

Before hitting the putt, the player couldn't have guessed he would have a tricky uphill pitch for his next shot, but Port Royal Golf Course punishes the slightest of errors.

Taylor Pendrith experienced no such difficulties on Friday as he shot a superb round of 61 to hit the top of the leaderboard. He leads by one shot on 11-under-par after 36 holes.

NEXT PAGE: PATRICK RODGERS: WILL THE BERMUDA CHAMPS BE HIS BREAKTHROUGH PGA TOUR WEEK?