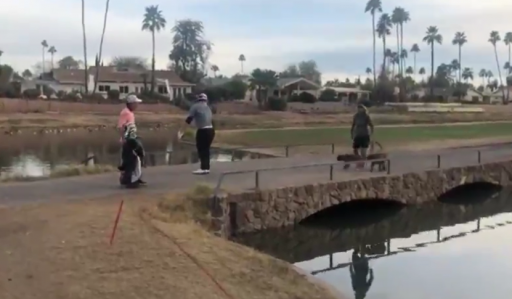 PGA Tour pro Joo Hyung Kim is either not much of a fan of dogs, or maybe only had one Pro V1x left - we can't be sure. His reaction, however, was priceless as a lady walked past him with her dogs yesterday in the Phoenix Open Monday Qualifier at McCormick Ranch GC in Scottsdale.

Kim, the World No.164, struck his ball onto a bridge down the par-4 6th hole and called for a rules official - unlike a certain Patrick Reed at Torrey Pines last week.

As Kim was waiting for the referee to come over to his ball, a lady was walking past with her two dogs. She said: "Don't worry, we're not touching your ball. He'll eat it, he'll take it, and I know that this is important!"

She then laughs, before hinting she could be a comedian for a living: "Oh yeah, he would have been after that. He would have run and put it in the hole for you!"

Kim's reaction as all this is going on is hilarious. With nervous laughter as the lady is walking past with her dogs, Kim looks like he is trying to line up a six-man wall around his golf ball.

Monday Q lyfe to the max.

The 164th ranked player in the world was waiting for ruling.... and this happened. Sound up pic.twitter.com/EvMuHrWtbf

Incredibly, Kim managed to make par from off the bridge, but he would only go on to post a 2-under 70 which fell some way short of the required total to become eligible for this week's Phoenix Open down the road at TPC Scottsdale.

NEXT PAGE: WILL THE LADY THAT REVEALED A LITTLE TOO MUCH LAST YEAR BE AT THE PHOENIX OPEN THIS WEEK?!