You'll struggle to find a better shot all week at The Players Championship than this insane chip in from Robert MacIntyre at the iconic 17th hole. 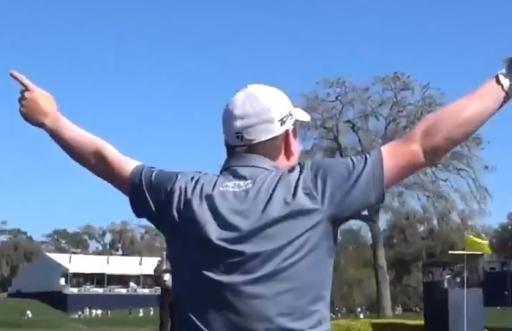 A video has emerged of Robert MacIntyre hitting one of the best shots you will see all week at TPC Sawgrass during a practice round ahead of The Players Championship.

The par-3 17th hole at TPC Sawgrass is one of the most iconic holes in golf, due to the island green that so many players have fallen victim to over the years.

Due to the structure of the hole, one shot that we see fairly regularly is players having to chip back on to the green whilst facing the opposite way, as their ball is too close to the edge to be able to take their normal stance.

MacIntyre though is left handed, meaning that should he face this shot this week, he will be fortunate enough to take his normal stance, unlike the right-handed players.

During a practice round, MacIntyre faced the shot that so many right-handers dread and instead of playing it normally, he decided to borrow a right-handed club and take on the challenging shot for a bit of fun. The result was nothing short of spectacular.

WATCH MACINTYRE'S INSANE SHOT IN THE CLIP BELOW:

It was a mindblowing shot from MacIntyre, as it's most definitely not a shot that he attempts too often, especially with his opposite hand.

The Scot might have produced some magic during a practice round, but it's safe to say he won't be attempting that again should he find himself in the same situation at some point this week when the tournament is underway.

NEXT PAGE: PGA Tour places OUT OF BOUNDS notice at 18th to stop Bryson DeChambeau plans