Rory McIlroy on Tiger Woods: "Even from the hospital bed he's giving me heat!"

Tiger Woods had some stern words for Rory McIlroy after he failed to win at Bay Hill last week. 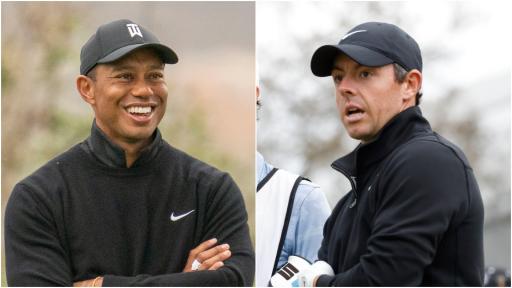 Rory McIlroy revealed to Jimmy Fallon that Tiger Woods was giving him "heat" after he failed to get the job done at Bay Hill during the final round of the Arnold Palmer Invitational.

The Northern Irishman spoke with Fallon on The Tonight Show via a video call as he prepared for this week's Players Championship at TPC Sawgrass.

Fallon asked McIlroy about the recent 'Sunday Red' tribute that some of the Nike Golf athletes took part in to show their support for Woods during the final round of the WGC-Workday Championship.

McIlroy then provided an update on Woods' current health and said that there is a chance the 15-time major winner could soon be out of hospital and able to go home to his family.

LISTEN TO MCILROY'S UPDATE ON WOODS IN THE CLIP BELOW:

“Everyone coming out in red and black on Sunday a couple weeks ago was just a very small way to show that we are thinking about him and hopefully we see him back out here again soon.”

"I’ve spoken to him a little bit, he’s doing better," said McIlroy. "I think all the guys have reached out to him and hopefully if things go well over the next week or so he might be able to get home and start recovery at home which would be great for him. See his kids, see his family. But yeah he’s doing better and I just think all of us are wishing him a speedy recovery at this point."

Fallon went on to ask if Woods had been in contact at all to let him know he's watching and McIlroy said that he had received some words of encouragment during the Arnold Palmer Invitational, but after failing to get the job done, Woods was straight on his case.

"He text me some words of encouragement before the final round at Bay Hill on Sunday and things didn’t quite go to plan and he was the first one to text me and he was like 'what’s going on here?' So even from the hospital bed he’s still giving me some heat.