Rory McIlroy did something he had only done ONCE before at The CJ Cup!

McIlroy's putting stats were off the charts at The CJ Cup, and he even set a new stats record. 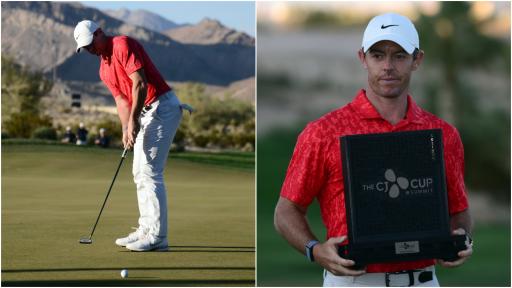 Rory McIlroy might not be renowned as one of the best putters on the PGA Tour but he certainly got hot with his magic wand en route to a 20th career victory on the circuit at The CJ Cup.

McIlroy, 32, carded a final-round 66 to see out a narrow one-shot victory over Collin Morikawa at The Summit Club on Sunday.

What we find incredible about McIlroy's victory is that his strokes-gained approach to the green was measured at -3.630, ranking him 67th in the field.

Tiger Woods & Bryson DeChambeau play CATCH on the range at Hero World Challenge
Tiger Woods net worth: How much is the golfer worth as he continues his rehab?

For those none the wiser, this means McIlroy was losing 3.6 shots to field with his approach play - something unthinkable for not only an imperious iron play like McIlroy but also a winner on the PGA Tour.

To put this statistic further into perspective, McIlroy's -3.630 number is the lowest (worst) of all time from a winner since records began in this category on the PGA Tour (stretching back 600 measured PGA Tour events).

It was therefore down to McIlroy's TaylorMade Spider X Hydro Blast to bail him out of trouble.

And it certainly did that, and then some.

McIlroy led the strokes-gained putting statistic during a tournament week on the PGA Tour for just the second time in his career at The CJ Cup.

The newly-promoted World No.8 achieved an impressive 6.028 statistic in the category.

RELATED: GOLF FANS FUMING ABOUT THE PGA TOUR COVERAGE AT THE CJ CUP - "WOULD HAVE BEEN NICE TO SEE RICKIE AND RORY ON THE FRONT NINE!"

McIlroy had only previously topped the strokes-gained putting stat when winning the 2018 Arnold Palmer Invitational.

RELATED: WHAT'S IN THE BAG OF RORY MCILROY

McIlroy was unsurprisingly toward the top end of the driving distance for the week at The CJ Cup, ranking fourth on 321.2 yards.

The Northern Irishman joins elite company as the seventh youngest player on the PGA Tour to win 20 times since 1960.

Tiger Woods was 24 years old, Jack Nicklaus was 26, Tom Watson and Arnold Palmer were 30, Phil Mickelson was 31 and Billy Casper was 32 just like McIlroy.

NEXT PAGE: FITNESS MODEL HAS AN ABSOLUTE MARE WITH HER SWING!

Tiger Woods
Rory McIlroy
PGA tour
Ryder Cup
bryson dechambeau
Previous
Golf rules: What happens when an UNRULY baby crawls to your ball and holes it?!
Next
Will we see Tiger Woods and Charlie Woods at PNC Championship with Nelly Korda?