Viewers on both side of the pond had to make do with coverage of the PGA Tour Champions as Rory McIlroy and Collin Morikawa battled it out on the front nine in Las Vegas. 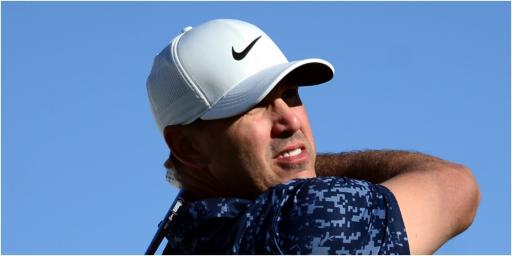 Let's face it, at this time of year our golf coverage isn't that great.

Big names are missing as they take some time off from the Ryder Cup and get ready to go again in the next few months.

It is to be expected, tournaments at this time of year have never attracted the biggest of names.

But last weekend at the CJ Cup at Summit in Las Vegas on the PGA Tour was different.

Oh, Rory McIlroy turned up the heat and won again.

Collin Morikawa surged through the field on Sunday and was doing his level best to try and stop McIlroy.

Even Adam Scott was in the mix along with Xander Schauffele, Ian Poulter and a cursing Tyrrell Hatton.

Which is why it was such a shame we had to wait to see what happened.

We missed the first 11 holes of the coverage.

It was no biggie, Morikawa was only 8-under through those.

The PGA Tour Champions' SAS Championship coverage was extended because the tournament went into a playoff.

GolfChannel decided to stick with the coverage as Lee Janzen won.

In the UK, Sky Sports opted to continue showing the conclusion of the ladies' Aramco Team Series event in New York.

We're not bashing that, but it would have been nice to have the choice considering we pay our hefty fees to enjoy the golf channel.

It is true. Pure insanity. Nothing loves to get in its own way more than golf. https://t.co/F9bEdd9yXQ

A Rickie-Rory Sunday final pairing and only about half is going to be aired. Truly remarkable. https://t.co/6S5dFR11tE

Lee Janzen wins. Not sure what's on TV next.

Can you please give a statement on your live golf coverage, or lack off. CJ cup coverage was totally disappointing. Especially Sunday's final round. Starting after 9 holes have been played. As a paying customer i feel totally ripped off. It's seems to be getting worse every week.

Not having golf coverage until the back nine of any event let alone a stacked event like this just shows how badly managed it is. Don't they realize people have multiple screens!?

RELATED: HOW TIGER WOODS' CHIPPING TECHNIQUE CAN HELP YOU