Rory McIlroy compares his recent performances to that of his beloved Manchester United, but he admits confidence is on the rise as he tees up in Tiger Woods' Hero World Challenge. 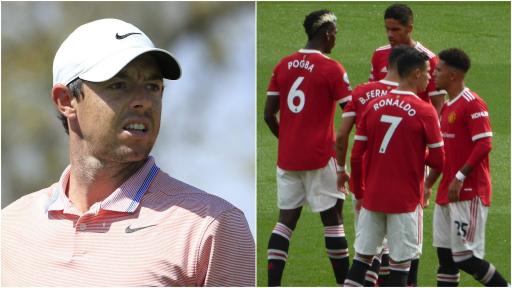 Rory McIlroy has drawn comparisons with his beloved Manchester United where his golf game has been concerned in recent times.

McIlroy was speaking to the media ahead of his final event of 2021 at this week's Tiger Woods-hosted Hero World Challenge event at Albany in the Bahamas.

The Northern Irishman says his performances on the course around the time of being benched at the Ryder Cup for the first time in his career in September were similar to that of Ole Gunnar Solskjaer's seemingly lack of a philosophy at the Red Devils shortly before he was sacked two weeks ago.

As a result, Manchester United find themselves well off the pace in the Premier League title race, and in a battle just to make it into the Top Four spots for the all-important Champions League next season.

Manchester United now have caretaker manager Michael Carrick in charge for the last time tonight against Arsenal, with Ralf Rangnick coming in as interim manager until the end of the season.

McIlroy bounced back from a disappointing Ryder Cup campaign with victory at The CJ Cup in October, before going close again at the DP World Tour Championship last month only to fall away on the closing holes.

But McIlroy, who has now returned to his former long-time coach Michael Bannon, now believes he has his mojo back as he rounds out his season this week.

"I’m more sure of what I’m doing," said McIlroy, who currently lies eighth in the world rankings.

"I guess it’s a bit like we sort of talk about like Manchester United over the last few games have looked like they’ve been going out playing and not really having a strategy or a philosophy of how they want to play. That sort of felt like that was me for a few months of this season.

"Now I feel like I’ve regained like what my philosophy is and what my – basically the sort of golf that I want to play."

NEXT PAGE: RORY MCILROY HITS OUT AT JOURNALIST OVER "NOT FUNNY" RIPPED SHIRT JOKE