Rory McIlroy on outburst of anger: "I mean, this F***ING ripped shirt, Jesus"

The 32-year-old Northern Irishman faced the media and said: "It's not funny..." 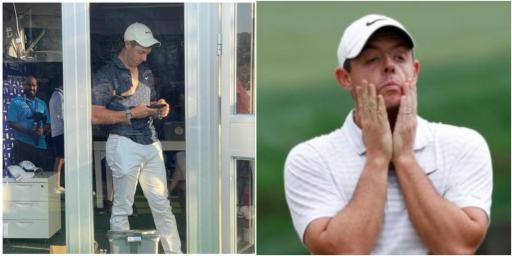 Rory McIlroy appeared to not be pleased when he was asked for what was the umpteenth time about his ripped Nike shirt.

The 32-year-old Northern Irishman was pictured with a visible tear down his top after the DP World Tour Championship in Dubai.

It led to a bogey as McIlroy couldn't scramble from the sand, three-putted the next and then sliced his drive up 18 into the desert.

It looked like a comedy of errors for the four-time major champion.

Collin Morikawa birdied five of the last seven to win the championship and also win the Race to Dubai.

Earlier in the week McIlroy was supreme.

He was shaping shots. Attacking pins. Being creative. Bouncing down the fairways. Hitting shots off rocks.

Everything we love about McIlroy.

He's playing at the Hero World Challenge this week which is being hosted by Tiger Woods.

A topic of choice for the throng of media included the ripped shirt.

Memo: do not ever ask Rory McIlroy about this ever again.

One journalist asked McIlroy about it, commenting the one he was wearing was nice, adding: "It's in one piece."

McIlroy's response? "It is. It's another joke you tried to make that's not funny." Crikey.

McIlroy added: "What I was angry about was how I reacted to the bad break, not the bad break or the fact I didn't win the golf tournament, because Collin played great.

"It was just my reaction to that bad break that made me angry because I basically lost my head after that and made a bogey on 16."

McIlroy added: "I went to the pro shop, bought a new one, threw that one in the trash."

There apparently was silence in the room for a brief second before McIlroy added: "I mean, this f***ing ripped shirt, Jesus."

McIlroy is one of the favourites for the Hero World Challenge and is playing his first round alongside Morikawa.