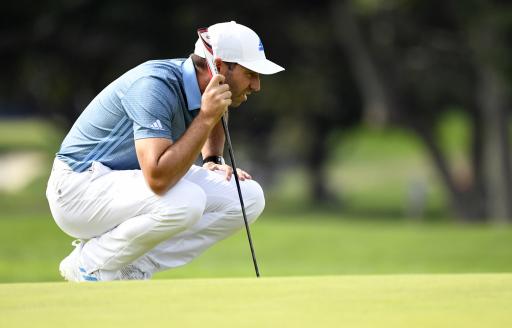 Sergio Garcia might be putting with his eyes closed at this week's Sanderson Farms Championship but he will certainly be looking at the leaderboard after moving into contention for an 11th PGA Tour title.

Garcia, 40, carded a consecutive round of 68 at Country Club of Jackson to move to 8-under par for the tournament and into a tie for seventh heading into the weekend, albeit five strokes behind 36-hole leader Keegan Bradley.

Putting with his eyes closed.

The Spaniard may have been caught putting with his eyes closed during his second round, but the 2017 Masters champion confirmed he has actually been doing this every now and then since he slipped on the famous green jacket.

"Would you believe me if I told you I’ve been doing it for about three years?" Garcia told reporters after his round.

"I’ve gone on and off, but like Augusta I won it playing with my eyes closed every single putt and some of the other wins, too.

"I’ve tried — I feel like it gives me a little more freedom to feel the stroke instead of kind of — sometimes we get too focused on trying to make it perfect and kind of following with the eyes and everything.

"So, this way I feel like I just feel it and I just let me natural ability kind of take over instead of telling myself what to do."

"I talked to my wife, to Angela, and I have to stick to something and go with it no matter what," said Garcia, who last won on the PGA Tour at Augusta National in 2017.

"I’m in a stage of my career where I can’t be jumping back and forth too much because then I get no rhythm whatsoever. It’s about slowly building up confidence. I feel like my game is – I’ve been saying it for a couple of months now, I feel like it’s close. It’s right there."

He added: "I would love to putt with my eyes open, but I feel like my stroke is more consistent when I kind of try to forget about it and just kind of feel it.

"That’s what I’ve been doing. I’ve tried to putt with my eyes open again here and there and I tried it at the US Open a couple weeks ago, obviously didn’t work very well.

"At the end of the day we all try to find a way to feel comfortable. Jordan (Spieth) used to putt looking at the hole. It’s kind of like the same thing."

As for what people might be saying about his new putting method on social media, Garcia could not care less.

"I don’t care what they think," said Garcia. "They’re not out there playing. I’m going to do whatever I feel is best for me."