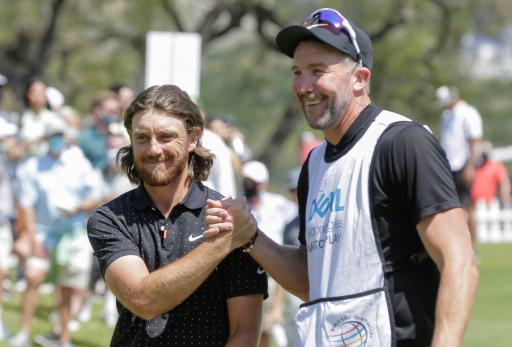 Tommy Fleetwood made a hole-in-one on the par-3 4th during his Round of 16 match at the WGC Match Play.

Fleetwood had already moved ahead in his match against Dylan Frittelli following a birdie at the par-4 1st, and he extended it to 2 up with a par at the 2nd hole.

But then Fleetwood followed in the footsteps of Sergio Garcia just 18 hours previous by sending his tee shot into the cup for a hole-in-one on the par-3 4th to stretch into an early 3 up lead on the South African.

WATCH THE VIDEO BELOW FOR FLEETWOOD'S ACE:

Fleetwood went on to win the match 4&3 to set up a quarter-final clash with Billy Horschel, who defeated Kevin Streelman 3&1.

Scottie Scheffler defeated Ian Poulter 5&4 and he will face the lowest seed left in the tournament, Jon Rahm, who beat Erik Van Rooyen 3&2.

Matt Kuchar beat Jordan Spieth in the final game with a birdie on the final hole to win 1up, and he will now face Brian Harman, who incredibly overturned a 4 down deficit thru six holes to beat Bubba Watson 2&1.

WGC MATCH PLAY: ROUND OF 16 RESULTS

The quarter-final matches will take place on Saturday afternoon.