Tiger Woods would probably pass given he is recovering from his car crash. 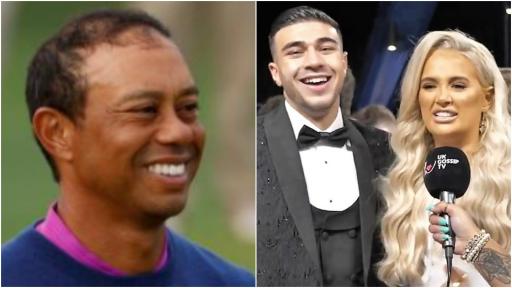 Tommy Fury has told Jake Paul that he "should have gone and fought Tiger Woods" instead ahead of their upcoming boxing fight on December 18.

Tommy, who rose to fame in Love Island alongside his now partner Molly-Mae Hague in 2019, is the brother of WBC heavyweight champion Tyson Fury.

Paul beat former UFC champion Tyron Woodley last time out to maintain a 4-0 record in bouts, while Fury defeated his sparring partner Anthony Taylor on the undercard to move to 7-0 in his pro career.

Fury, who is considered a firm favourite to defeat Paul next month, is clearly very confident ahead of the fight, especially after today claiming that Paul would have more chance against a 15-time major golf champion.

Then again, we are not sure that is particularly fair with Woods still recovering from leg injuries ahead of a return to the PGA Tour.

“I took this away from his fight with Tyron Woodley. The man got a split-decision win," said Fury.

"When you get in there with a fresh 22-year-old whose been doing this all his life, you’re going to wish you stuck to paying UFC fighters off and basketball players.

"You should have gone and fought Tiger Woods, not somebody who has done it his whole life because you’re in for a big shock.

"You’re the one who is going to crumble."

Fury's father John Fury recently said his son should retire from the sport if he fails to knockout Paul on December 18.

NEXT PAGE: IS A 69 PLAYING HANDICAP TOO MANY SHOTS IN A ROUND OF GOLF?

Tiger Woods
PGA tour
Ryder Cup
bryson dechambeau
brooks koepka
Previous
The DP World Tour signals a DEPRESSING end to the European Tour and its values
Next
PGA Tour: How to watch the Houston Open and Round 1 and Round 2 tee times