Tiger Woods: his 7 biggest PUBLIC ENEMIES on the PGA Tour

Tiger Woods is (hopefully) on his way back to the PGA Tour... but not everyone will be thrilled. 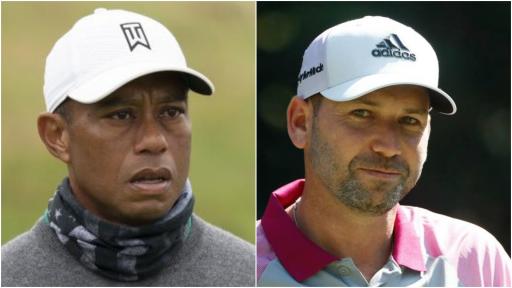 Tiger Woods is (hopefully) on his way back to the PGA Tour... but not everyone will be thrilled.

Woods continues to recover from leg injuries sustained during his horror car crash in Los Angeles in February, but to the delight of many golf fans around the world, the former World No.1 played and finished second with his 12-year-old son Charlie Woods at the PNC Championship last month.

While great to see Woods back on the course, it remains to be seen how many tournaments the 15-time major champion will be able to compete in on the PGA Tour in 2022.

It's fair to say not everyone is buzzing about the return of Woods though, especially these seven:

That was until he spoke about the former World No.1 during his very own Sirius XM Show back in 2017.

"The bottom line is, he knows he can't beat anybody," said Perez.

"He's got this new corporation that he started so he's got to keep his name relevant to keep the corporation going.

"He's going to get on TV, he's got the Nike clothes, he's gotta keep that stuff relevant."

Perez later backtracked on his comments and told the media his words were taken out of context.

"I had an opinion on Tiger, and I said it," he told ESPN.

"No one wants to see Tiger come back, compete and win again more than me."

Perez and Woods reportedly traded messages back and forth following those comments, and Woods was understandably miffed by them.

Woods then went on to land his 15th career major at The Masters in 2019, before later going on to win the ZOZO Championship on the PGA Tour to enter the record books as the joint leading winner on the circuit.

If there was one duel the world of golf expected to see more of, it was of Woods and Sergio Garcia.

With the exception of the final round of the 1999 US PGA Championship, when a fresh-faced Garcia ran Woods close for the title only to be denied on the closing holes, their battle has only intensified outside of the ropes.

"The reason Tiger dislikes him is that in the clubhouse once he saw Sergio looking up at a television monitor and rooting somebody's golf ball out of the hole... that's why he has no use of Sergio," said Woods' late father Earl.

Woods and Garcia's biggest spat came on the golf course in 2013 at The Players Championship at TPC Sawgrass. Woods apparently pulled a club while Garcia went on to mishit his shot... before throwing his toys out the pram. There have been differing accounts as to what exactly happened, but Sergio was clearly not happy.

Their feud intensified further when Garcia made what was deemed by many as a racially insensitive joke about Woods at an awards dinner ahead of the BMW PGA Championship at Wentworth.

Garcia and Woods do not like each other, and it's now very much a case of keeping their heads down when they bump into each other in the locker room.

Brandel Chamblee, a one-time PGA Tour winner, is perhaps the biggest Tiger Woods hater of them all.

Chamblee, a long-time Golf Channel analyst, has often been an outspoken critic of Woods down the years.

Like Garcia, 2013 was the year when things escalated a little as Chamblee believed Woods had been a "little cavalier with the rules" during the second round of The Masters.

Woods was docked two shots for what was deemed an improper drop on the par-5 15th hole, turning his six into a triple-bogey eight.

Although Chamblee never used the word "cheater", he strongly implied it.

Woods was voted Player of the Year by his peers, but Chamblee gave his season an "F" for his apparent infraction at Augusta.

Tiger Woods won 13 of his 15 career majors with Steve Williams on the bag, and it's estimated he won around $12 million working for Woods during their 12-year relationship. Not bad going for not even hitting a single shot.

Williams got the elbow from Woods in 2011, and then quickly told the world how he felt about it when helping Adam Scott win the WGC-Bridgestone Invitational shortly afterwards.

"I've caddied for 33 years, 145 wins now, and that's the best win I've ever had," said Williams after Scott's triumph.

The following day Williams expressed regret for his remarks, noting they were "over the top".

He said: "I had a lot of anger in me about what happened (with Woods) and it all came out."

Williams then compounded things at a caddie awards dinner during the WGC-HSBC Champions later in the season when shockingly saying: "My aim was to shove it right up that black [expletive]."

It is fair to say there is now love lost between Woods and Williams today.

"One thing that really pissed me off was how he [Woods] would flippantly toss  a club in the general direction of the bag, expecting me to go over and pick it up," wrote Williams in 'Out of the Rough'.

"I felt uneasy about bending down to pick up his discarded club - it was like I was his slave."

RELATED: THIS TIGER WOODS STAT MIGHT MAKE YOU FEEL BETTER ABOUT YOUR GOLF GAME

It was a fruitful relationship, following the golden years of work with Butch Harmon.

Woods' time under Haney, however, coincided with a number of surgeries and his "indefinite hiatus from golf".

Things quickly began to fall apart and Woods then left Haney to work with Sean Foley after the 2010 Players Championship.

In 2013, Haney then published a book about his time working with Woods called 'The Big Miss'.

Woods took exception to many things in the book, including Haney's revelation that Woods wanted to leave golf and join the Navy Seals.

The book also revealed how Haney favoured just about everything Steve Williams had to say about him when it comes to being a "slave".

Haney said: "Steve Williams is the last person in the world that would lie. He just doesn't do it, so obviously that happened."

EXCLUSIVE: "I WOULD BE ASTOUNDED IF TIGER WOODS MAKES THE MASTERS," SAYS LEADING GOLF PHYSIO

It is fair to say Tom Watson and Woods will never be best buddies.

From the cursing and slamming of clubs to the detached disdain, Watson has been troubled by Woods' antics for a while.

Golf is a gentleman's game and players should be acting accordingly in the eyes of Watson.

"I feel that he has not carried the same stature that other great players that have come along like Jack Nicklaus, Arnold Palmer, Byron Nelson, the Hogans, in the sense that there was language and club throwing on the golf course," said Watson.

GolfMagic even once heard from a former European Ryder Cup captain that Watson reacted strongly when he heard Woods had been "demanding team orders and throwing his weight around in the US Ryder Cup team-room."

Watson was having none of it.

The eight-time major champion has rarely come out and expressed his honest opinion of Woods, but he did once use a tongue-in-cheek response of "Tiger doesn't need my advice."

Watson was also a bit miffed ahead of the 2014 Ryder Cup when Woods withdrew through injury.

While Woods' statement made it sound like he had contacted captain Watson, he said he only learned of Woods' withdrawal after calling him.

"I want Tiger," demanded Sabbatini during the 2007 Players Championship.

"Everyone wants Tiger. I want him to pick it up this week and we'll be there late Sunday.

"I think he's more beatable than ever."

Woods responded: "I figure I've won nine of the last 12 tournaments, and I've won three times this year - the same amount he's won in his career."

Later that year, Sabbatini left town before the fourth round of Woods' Hero World Challenge tournament... one way to get off Tiger's Christmas Card list.

Then again, Sabbatini is probably not on many when it comes to the PGA Tour.

NEXT PAGE: SAM HORSFIELD RIPS INTO CAMERAMAN AT THE PORTUGAL MASTERS